When children in the Cal Poly Preschool Learning Lab climb to the top of their new playground equipment, they can see all the way across the campus. Through the eyes of a 4-year-old, it’s a little bit like climbing a mountain.

That’s exactly the idea, explained Learning Lab Director Patty Clarkson. Preschoolers need to be able to take risks within safe limits. “It builds self-confidence and resilience, and they become spatially aware of their bodies,” she said. Such an interactive space also allows for creative, dramatic play, such as when the children recently divided the playground tower’s platform into a living space and pretended they were a family of dogs.

“For me, it was about completing the circle. Cal Poly helped me become successful, so I wanted to give back and help others.”

The children at the Learning Lab have someone to thank for their new state-of-the-art outdoor learning space. The recently completed tower structure is the capstone of a nine-year project led by Cal Poly human development alumna Fran McIntyre.

The idea for the playground came to McIntyre in 2007, shortly after selling her business — an early childhood education company. She was looking for a way to give back to Cal Poly, the institution that had given her the skills and knowledge to launch a successful career. “For me, it was about completing the circle. Cal Poly helped me become successful, so I wanted to give back and help others.” 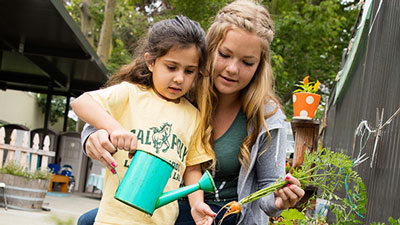 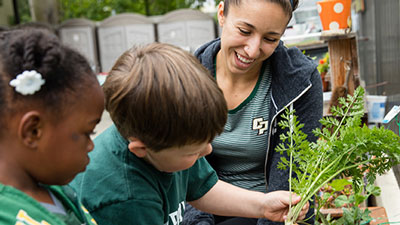 In addition to providing a high-quality preschool environment, the Learning Lab serves as a site for Cal Poly students to research child development and gain hands-on experience working with children. McIntyre knew the outdoor space did not give children many opportunities to engage in constructive play, which limited Cal Poly students’ ability to innovate in their work with the preschoolers. “We decided that we needed to find a way to redesign the playground so we could bring the curriculum of the Learning Lab outdoors,” she said.

With the help of landscape architecture faculty, McIntyre’s generous donation has transformed the preschool’s outdoor space into a varied natural environment, complete with hills, rocks, sand and playground structures. It’s now a space that lends itself to interactive learning, allows children to work on projects outside, and provides a dynamic space for Cal Poly’s child development majors to observe and engage with the preschool students as they learn and play. “Materials are designed to be taken in and out,” Clarkson said. “The idea is that the learning space should be fluid.”

When she started the project, McIntyre made it clear that giving back to future generations of educators was one of her major goals. At the same time, she wanted to honor the Cal Poly educators who helped put her on a path to success. In one of the corners of the playground is a small monument dedicating “Miss Josey’s Playground” to the memory of Professor Josephine Stearns, McIntyre’s mentor during her time at Cal Poly. “I made the donation and dedicated the playground in her name,” McIntyre said. “She taught me what high-quality childhood education is and the importance of the field.”

Thanks to McIntyre’s donation, future Cal Poly students will have the chance to interact with children as they play and learn in a unique space. “Fran is really giving back to educators,” Clarkson said. “Because of her, Cal Poly students can see an innovative version of what they’ll find in the workforce.”