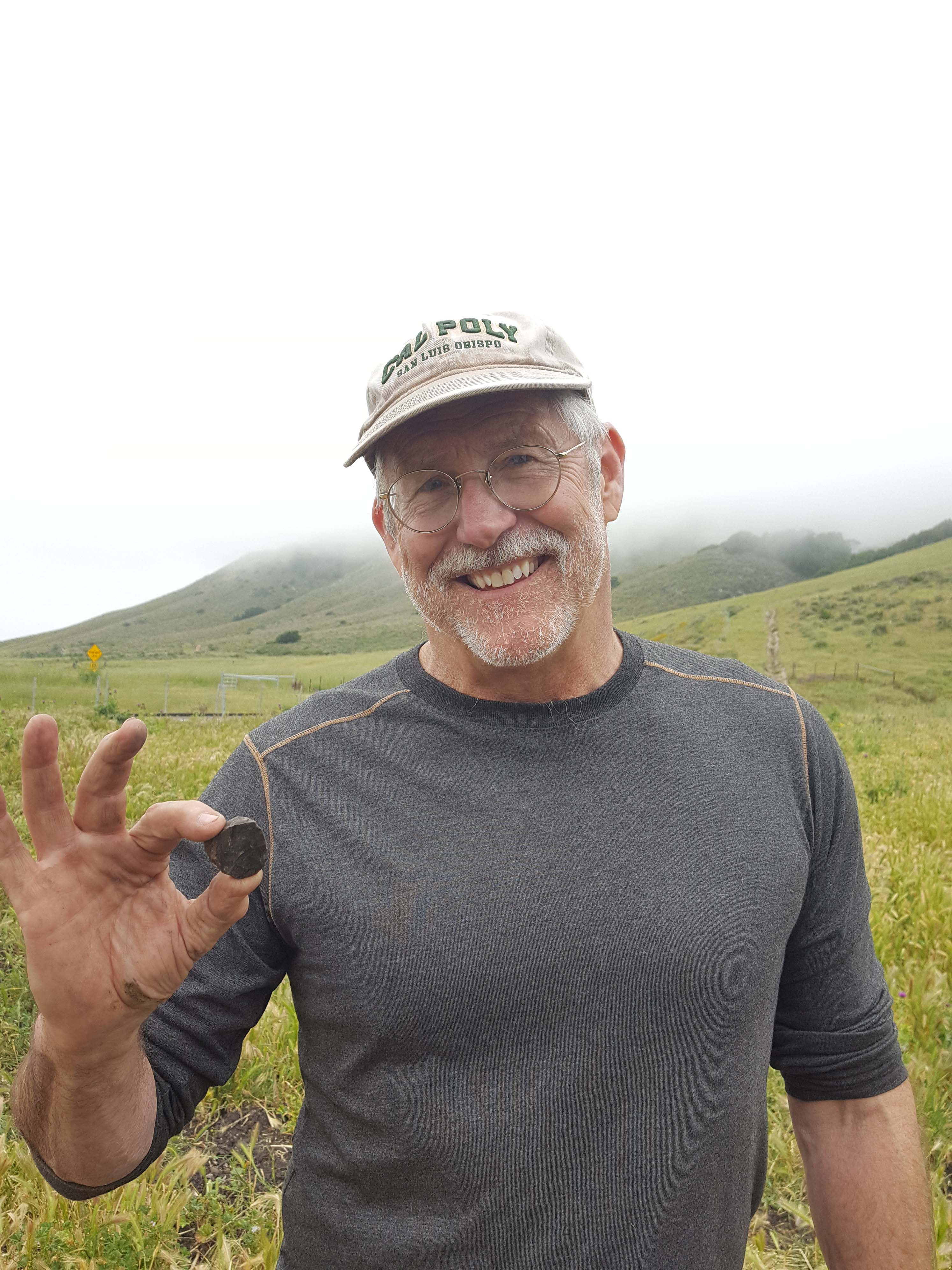 "“Students get an opportunity to Learn by Doing
while working at important cultural sites.
It gives them an authentic exposure to archaeology
and the realities of fieldwork.” — Terry Jones 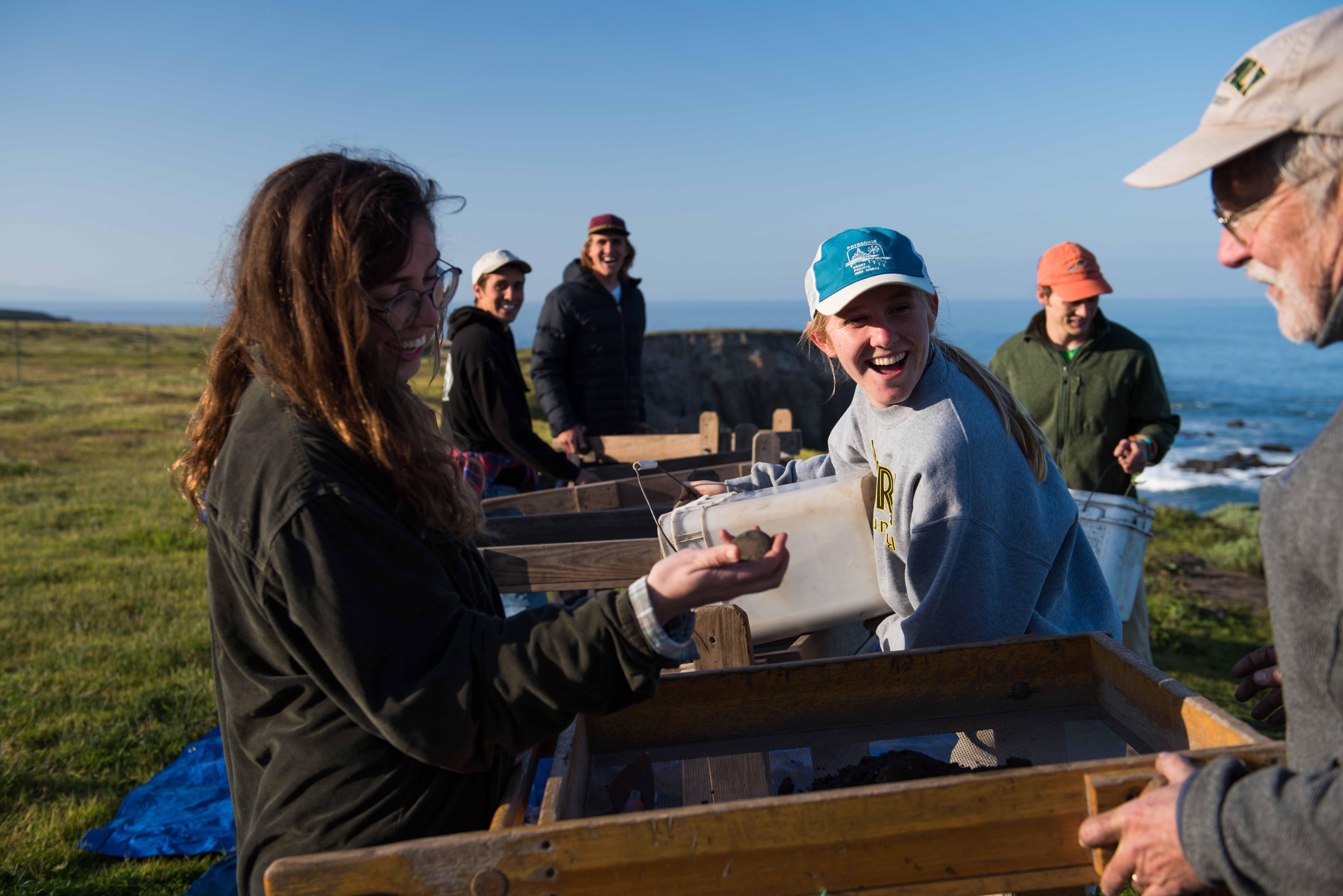 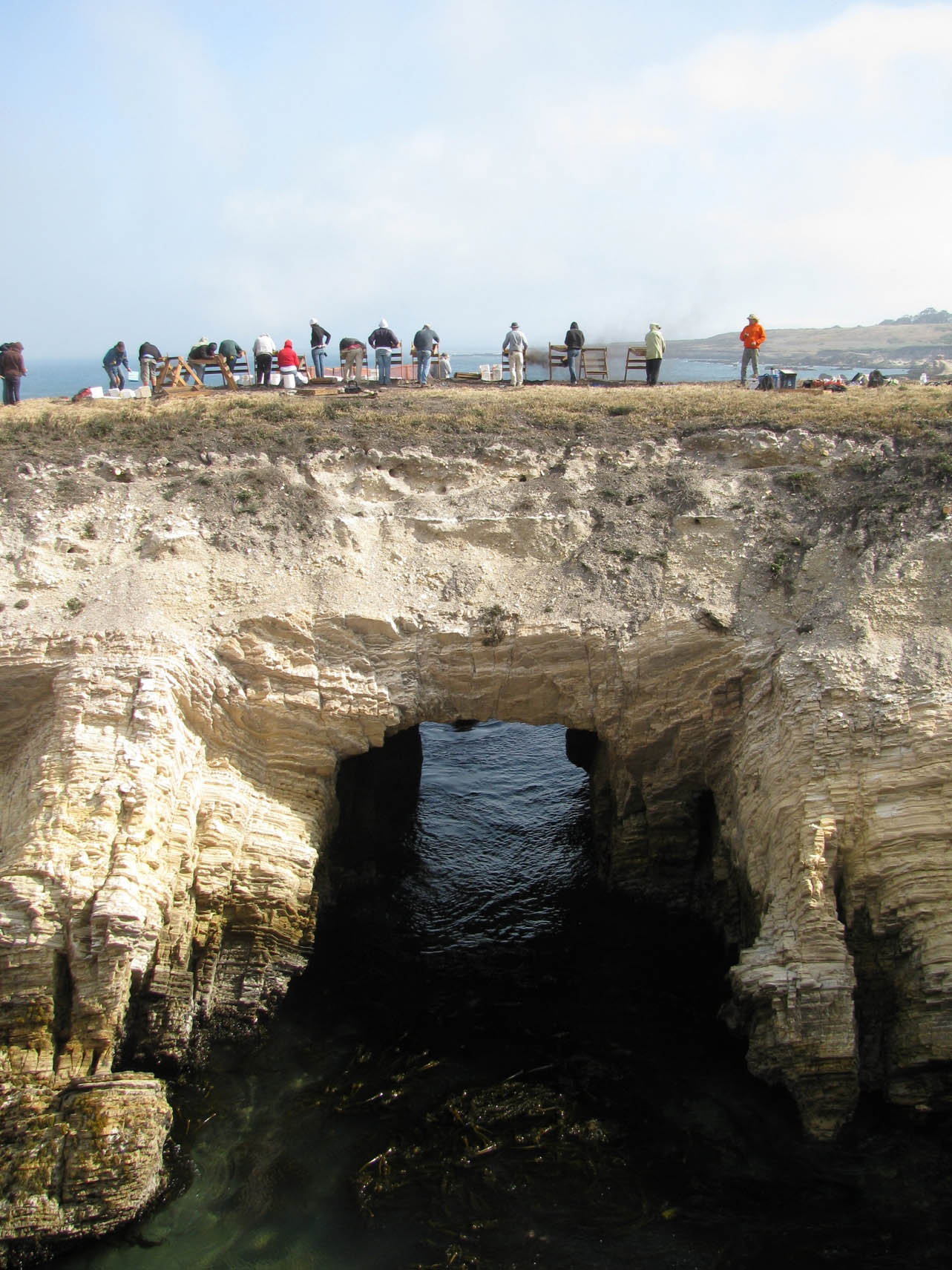 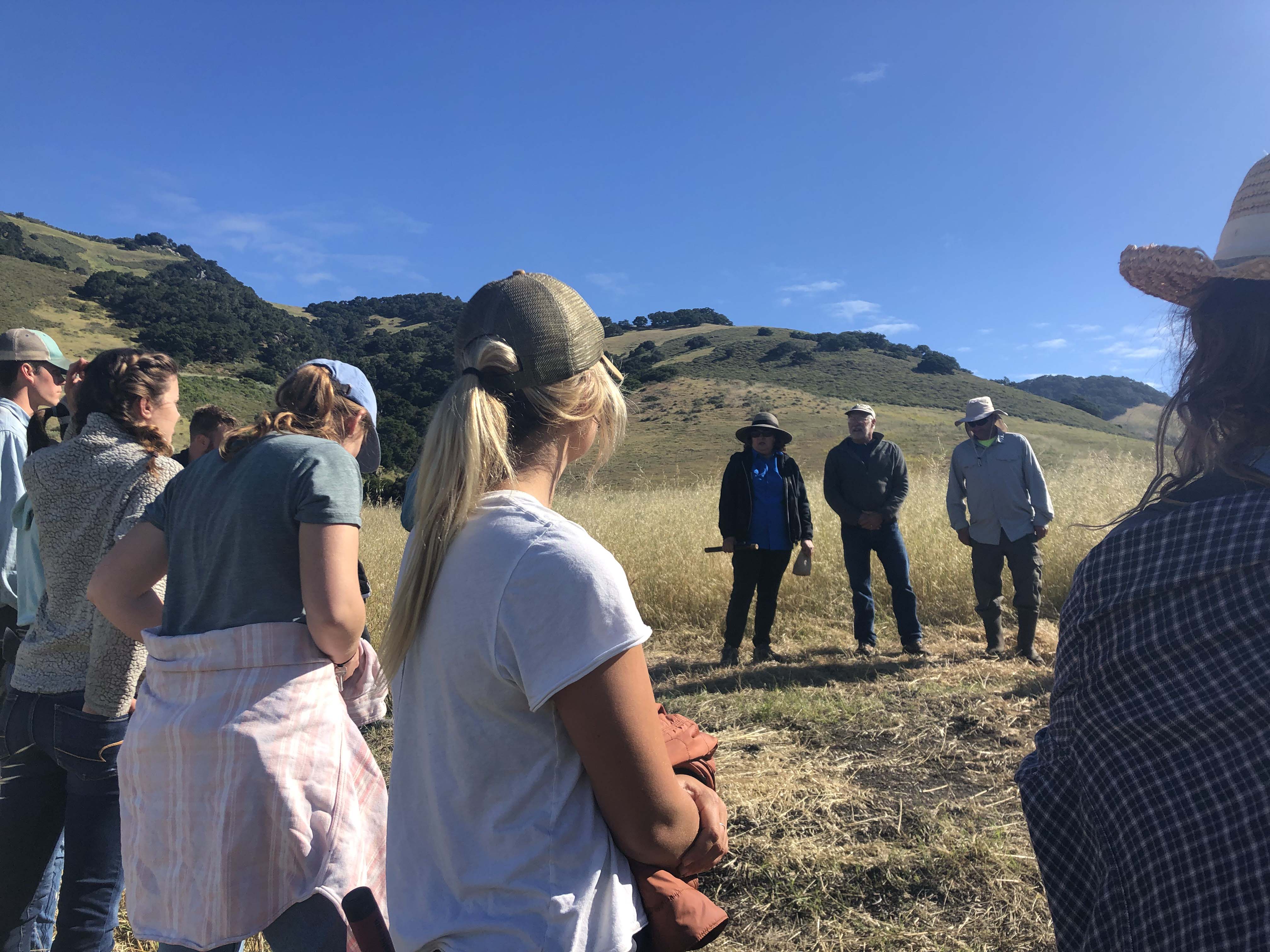 Jones with tribal leader Mona Tucker- Olivas and her son,
Matthew Goldman, as they address the field methods class. 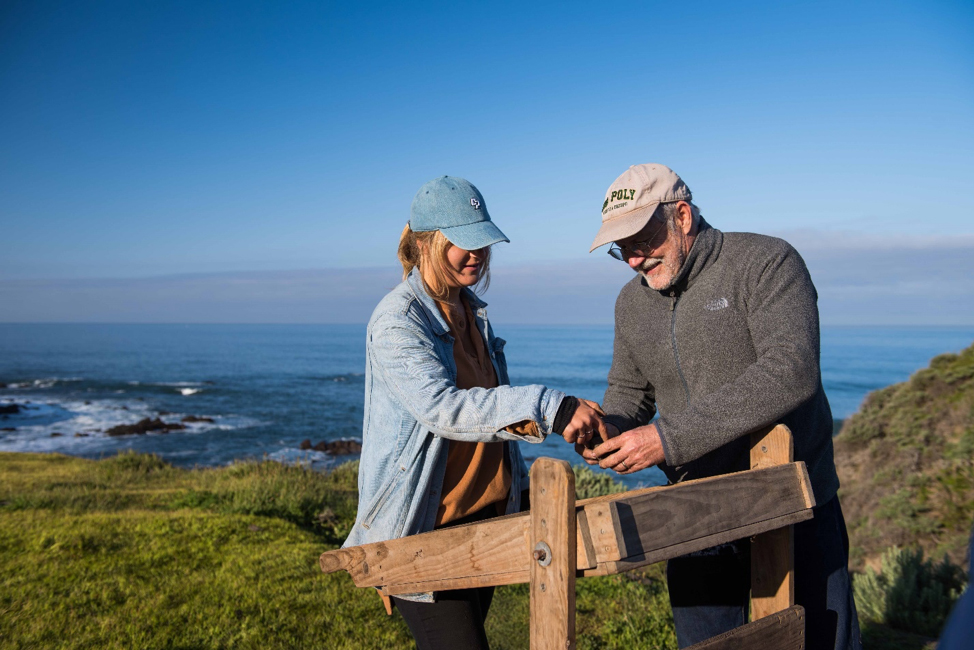 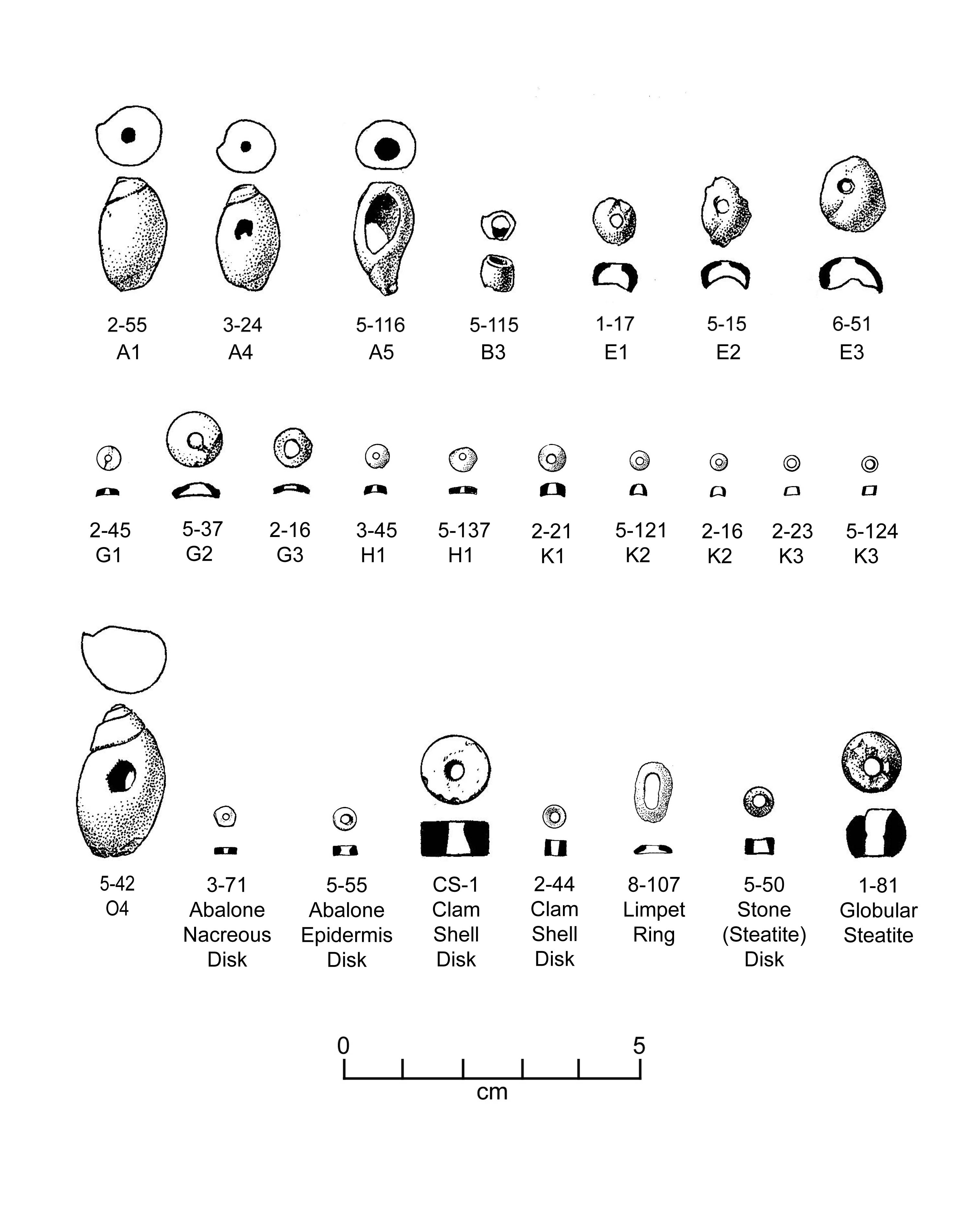 Types of beads found by students
during the archaeological class projects. 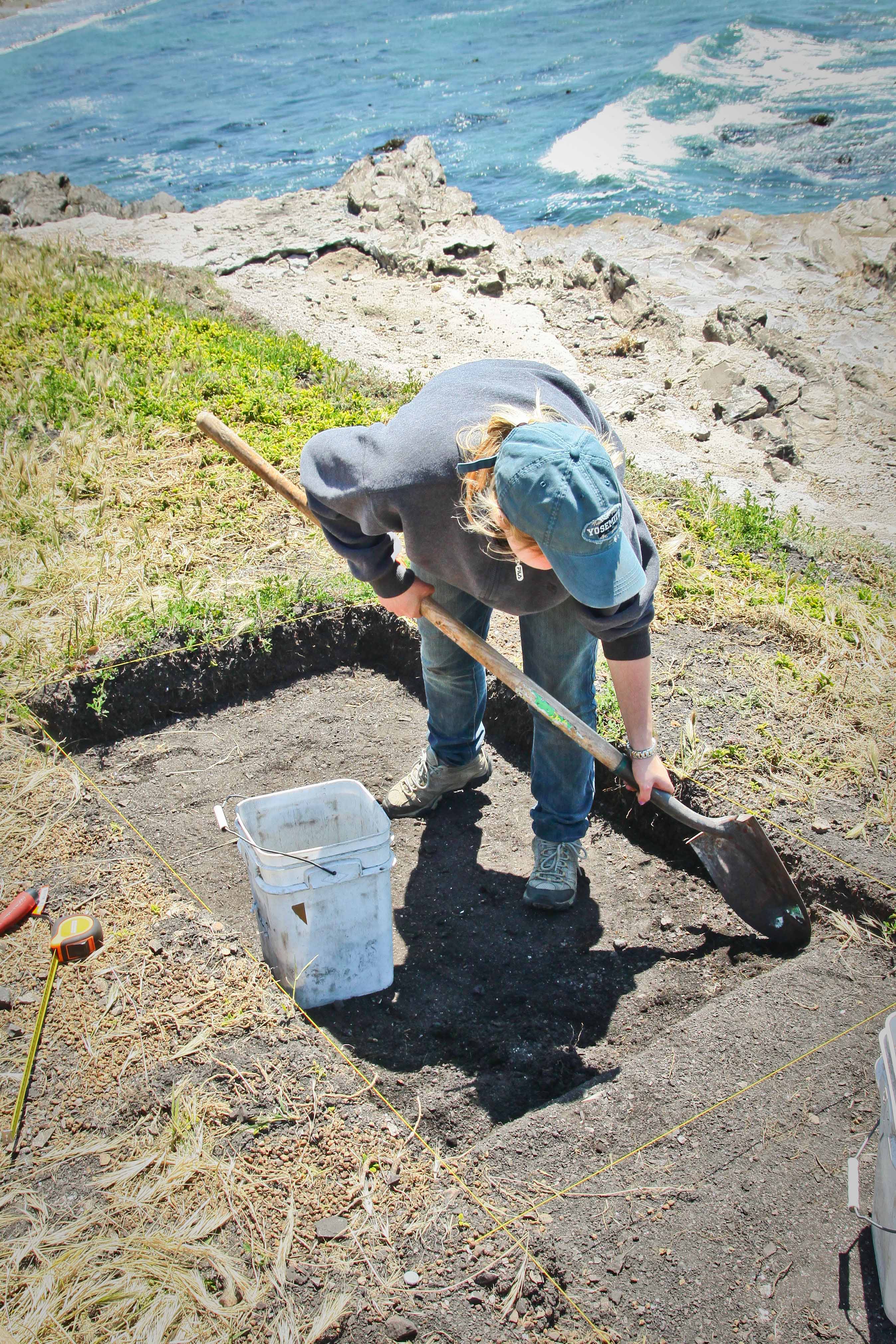 A significant part of California history will be preserved thanks to the work of Cal Poly archaeology Professor Terry Jones and his students.

The field class focuses on locations that have been affected by coastal erosion, public trail access and agricultural land uses. “We have the opportunity with PG&E to work on sites that are falling into the ocean,” Jones said. “We’re salvaging scientific information that would otherwise be lost.”

All of the work is done in close collaboration with the yak tityu tityu yak tiłhini Northern Chumash Tribe of San Luis Obispo County and Region. “Students get an opportunity to Learn by Doing while working at important cultural sites,” Jones said. “It gives them an authentic exposure to archaeology and the realities of fieldwork.” In the field class, students learn and practice basic archaeological field methods. They use shovels, screens and hand tools to sort through materials for artifacts.

In 2015, while excavating along lower Pecho Creek at site CA-SLO-51/H, a multicomponent site listed on the National Register of Historic Places, the field class uncovered glass trade beads — a particularly notable discovery. The beads were a clear indicator of the age and historical significance of the site, providing a direct link to the former Chumash village site of Tstyiwi, which was later the location of a Rancho Period adobe.

“It turned out it was a village that we could associate with a name in the mission records of San Luis Obispo, and that is very unusual,” Jones said. “It’s one of the very few sites in all of San Luis Obispo County where we have archaeological materials from a named village. We could make this really direct connection between that site and living people.”

Given the cultural and scientific significance of the Pecho Creek site, Jones discontinued excavation and redirected focus to preservation. Recognizing their responsibilities to manage the land, PG&E’s Diablo Canyon Land Stewardship Team (DCLST) voluntarily ended the agricultural program at the site. The DCLST worked with Cal Poly and the tribe to develop a restoration plan for the area. They rid the property of exotic plants and stabilized it with native grasses in 2017.

Although the lower Pecho Creek site is no longer being excavated, students still get to experience a new dig site each spring. “What excites me is the initial thrill of handling an artifact for the first time since it was left behind hundreds of years ago on the Pecho coast,” said Kyle Lynch, an anthropology and geography senior. “For a professional archaeologist, these finds are just another day at the office, but Dr. Jones is introducing Cal Poly students to that feeling for the first time and reconstructing California’s history based on the findings. It is the coolest opportunity I’ve had at Cal Poly.”

The spring 2019 class comprised 22 students and was divided into crews of five, each led by a crew chief to oversee the work. Each crew managed a 1-by-2-meter unit. With the class structured much like a construction project, students put in an eight-hour workday each Friday during spring quarter.

“Getting to go out there and be active is inspiring,” said former anthropology and geography student and spring 2019 crew chief Hannah Ehrlich. “Dr. Jones is such a big name in California archaeology. He is ‘the guy’ for the Central Coast, so it’s not just a class. The work also supports his research and publications, and to have a small hand in that is really exciting.”

In 2018, Jones’ research and collaboration on the Pecho coast with the yak tityu tityu yak tiłhini Northern Chumash Tribe and PG&E was recognized with a Governor’s Historic Preservation Award. These annual awards recognize individuals, organizations, companies and public agencies whose contributions demonstrate notable achievements in preserving the heritage of California.

“We feel like we are doing something that has multiple, solid benefits. It’s a win-win-win situation,” Jones said. “PG&E and the archaeological community win because scientific information is saved, and the Northern Chumash Tribe benefits from a cultural preservation standpoint. Students get an invaluable Learn by Doing experience. For the governor’s office to acknowledge that is a real honor.”