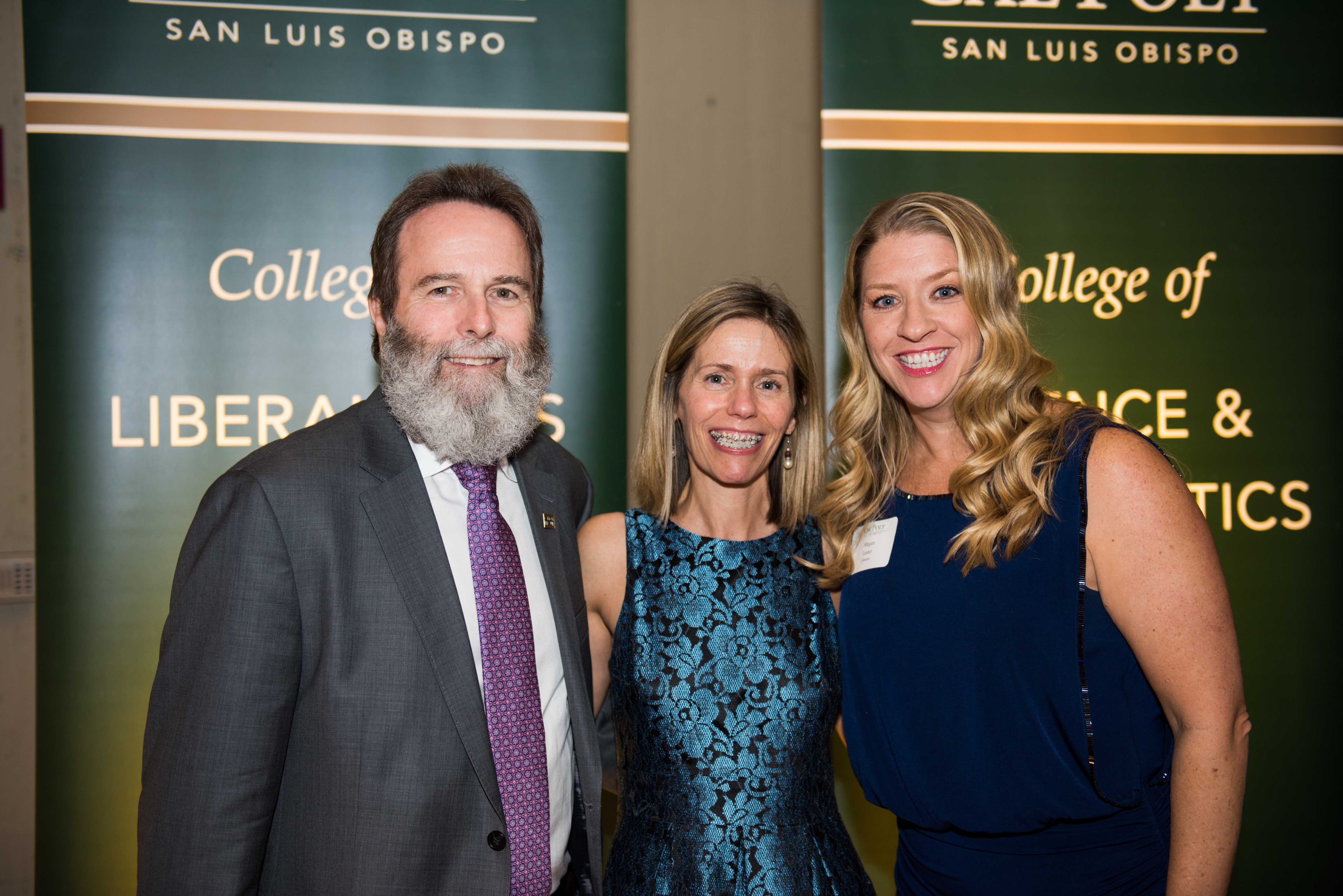 The CLA Honored Alumnus for 2018 was Tim Humphreys, who graduated in 1972 with a degree in political science. He began his career in politics and ran a successful re-election campaign for a local senator before knee surgery put him in the hospital for an extended time. While recovering, Humphreys met a fellow patient and computer coder, and his career was set on a new path. He founded Trident Services, a nationally recognized operating systems software development and services firm, in 1978. He credits his political science background as invaluable in building client relationships and understanding the complexities of business and government organizations, which helped to make Trident Services a success. Humphreys is a longtime supporter of the Political Science Department at Cal Poly, is a member of its advisory council and served a three-year term as the council’s chair. He was recently recognized by Political Science Department students with the first POLS Partner in Giving award for his unwavering support of student success, including sponsoring activities such as the student journal Paideia, student travel for conferences and student research projects. Humphreys and his wife, Pam, live in Capitola, California, and have four adult children.

The Alumni Association’s Distinguished Service Award went to Megan Lester (Graphic Communication, ’00). She is the sales director, national accounts, for IWCO Direct, a direct marketing communications company. Lester has partnered with Fortune 500 clients, executing data-driven marketing strategy for direct-mail campaigns. She is passionate about volunteering and dedicated 10 years to the Junior League of Orange County (JLOCC), serving in a variety of roles from vice president to recruitment chair of the JLOCC’s primary fundraiser. In 2013, she joined the board of the Cal Poly Alumni – Orange County Chapter, supporting the mission of connecting with more than 9,000 alumni living in and around Orange County. Lester served as president of the Orange County chapter from July 2015 through July 2018. During that time, the chapter hosted a record 38 events. She founded the chapter’s Fork ‘N’ Bottle Scholarship fundraiser in 2015 and the event grew to host more than 185 people and raised $36,000 in scholarship funds in its first three years. While at Cal Poly, Lester was the president of the Sigma Kappa sorority. She’s had a serious case of wanderlust since backpacking around Europe after graduation and has traveled to 40 countries across the globe.

1970s
Paula Zima (Graphic Communication, ’79) designed a sculpture of Theodore Roosevelt to honor his legacy of conservation in California as part of a proposed monument in San Luis Obispo.

1990s
Robert C. Tapella (Graphic Communication, ’91) was named the director for the U.S. Government Publishing Office to the U.S. Senate. / Steve Jones (Political Science, ’92), CEO of Allied Universal, published a book titled “No Off Season: The Constant Pursuit of More.” / Kerri Mahoney (Human Development, ’92) created a panel called “What We Wish Our Parents Understood,” where students talk openly about issues regarding social-emotional wellness and mental health. / Steffan Tubbs (Journalism, ’92) continues to produce veteran documentary films; his latest is “25 Steps” narrated by Peter Coyote. It is the story of two WWII POWs held at Stalag Luft I in Germany, who realize 73 years later they live across the hall from each other at a retirement community in Colorado. / Megen Guffey-Esquibel (Social Sciences, ’93; M.A. Education, ’95) became the new principal of Winifred Pifer Elementary School in Paso Robles. / Julia Bricklin (Journalism, ’94) released her second book, “Polly Pry: The Woman Who Wrote the West” in September 2018. / Jody Skenderian (Political Science, ’95) is now the chief institutional advancement officer and executive director of the Normandale Community College Foundation in Bloomington, Minnesota. / Simone Hosey (Human Development, ’99) was honored as a Woman of Distinction for 2019 by Cuesta College and The Community Foundation San Luis Obispo County’s Women’s Legacy Fund.

2000s
Nicole Paschoal (Speech Communication, ’04) became a licensed attorney in the state of California. / Melissa James (Social Sciences, ’05) was named the first CEO of the Hourglass Project, a nonprofit economic development organization in the Central Coast. / Lauren Smith (English, ’05) was named president of Lanier Ford, the largest law firm based in Huntsville, Alabama. / Ryan Putt (Music, ’06) is the assistant band director at Dunbar High School and Jacquet Middle School in Fort Worth, Texas. / Johannes Lichtman’s (English, ’08) first novel, “Such Good Work,” was released in Sweden last fall and in the U.S. by Simon & Schuster last February.

2010s
Steven DeLay (Political Science, ’10) wrote “Phenomenology in France, A Philosophical and Theological Introduction” and was the Thomas Jack Lynch Teacher-Scholar Postdoctoral Fellow at Wake Forest University’s Department of Philosophy for the 2018-19 academic year. / Erica Bashaw (Journalism, ’11) works as an attorney with Children’s Law Center of California. Bashaw married Dr. Manzer “Jim” Ghaznavi on Oct. 29, 2018, in Los Angeles in a ceremony performed by Bashaw’s judge, Hon. D. Zeke Zeidler. / Matthew Herman (Theatre Arts, ’13) graduated from UC San Diego with a Master of Fine Arts in scenic design under the mentorship of Robert Brill, who just opened “The Donna Summer Musical” on Broadway. / Jennifer Chin (Art and Design, ’14) appeared on ABC’s “Shark Tank” as co-founder of Toybox, a 3-D printer to design and print toys for children. / Catherine Heiting (Theatre Arts, ’14) is an assistant for the EVP of post-production at Columbia/Tristar at Sony. / Kathleen Palmer (Anthropology and Geography, ’15) was named one of Idaho Business Review’s “2019 Idaho’s 40 Accomplished Under 40.” / Brooke Collins (Psychology, ’15) did a year of service with the AmeriCorps in Bend, Oregon, before earning a master’s in clinical social work from Seattle University in June 2018. / Zulema Aleman (Psychology, ’17) is the North County youth organizer with Just Communities, whose mission is to advance justice. / Julia Freifeld (Psychology, ’17) created Jewels for Change, a jewelry company that raises money for nonprofits helping survivors of sexual violence. / Sophie Rosales (History, ’17) spent the past year in Vietnam as a Fulbright scholar and was awarded a David Boren Fellowship to study international affairs in China. / Diego-Christopher Lopez (Philosophy, ’18) completed a White House Internship Program last fall as part of the Office of Intergovernmental Affairs in Washington, D.C. / A film by Nikki Petkopoulos (Journalism ’18), titled “Young American,” was selected as a finalist for the Cal State Media Arts Festival.