Cal Poly students use storytelling to teach kids how to program robots. 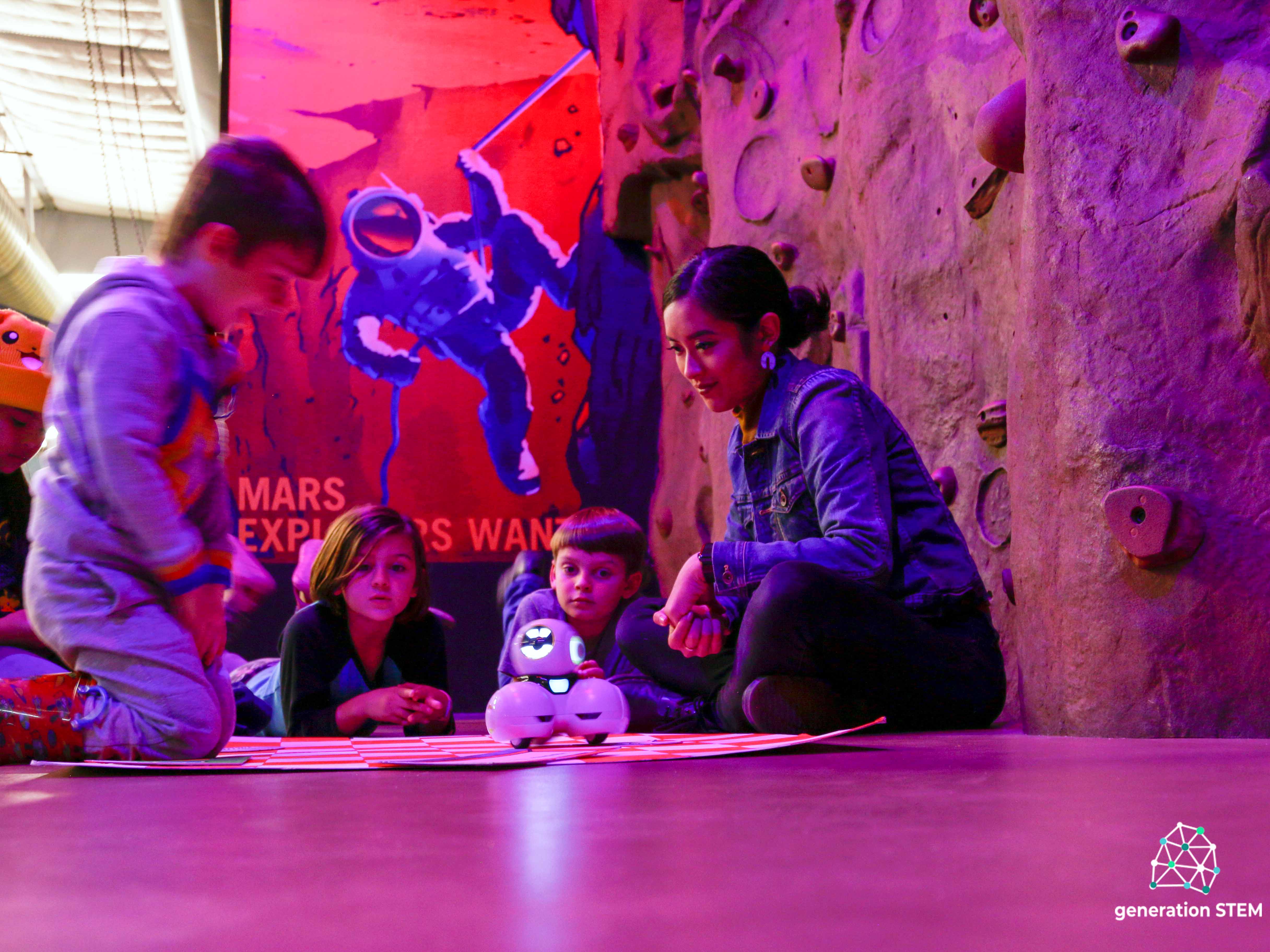 Young learners get a robotics lesson at a
Cal Poly student-led STEAM workshop. 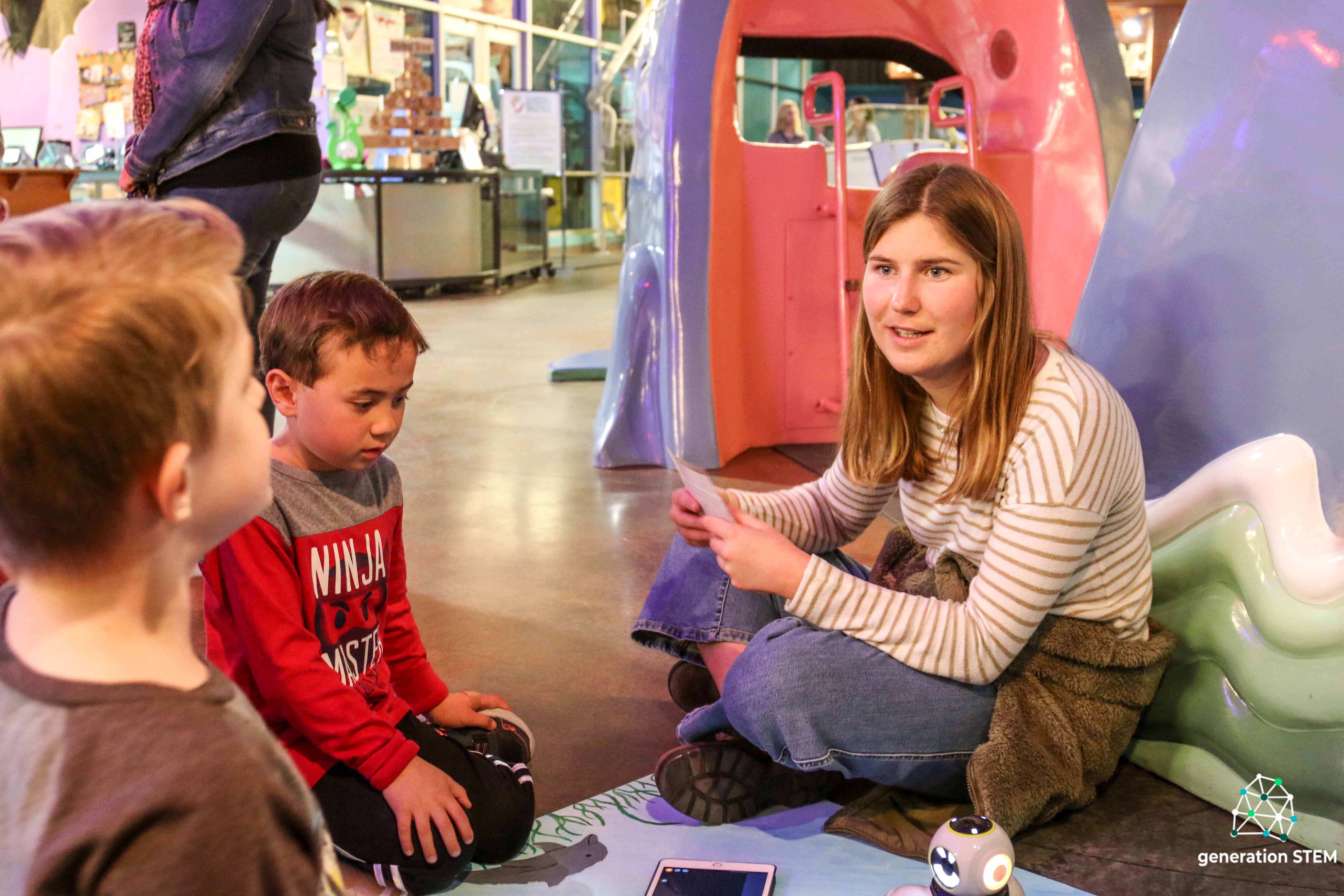 A group of students from Santa Maria visit
Cal Poly to take part in a STEAM workshop.

On one rainy Saturday morning in early March, a group of middle schoolers inside a building at Cal Poly were attempting to save their hometown of Santa Maria from destruction.

The young students were playing a role in a scenario written by Cal Poly students. In the scenario, the only way for the participants to save their community was to program small robots to complete very specific tasks. The middle schoolers were given 45 minutes to learn the basic capabilities of the robots, program the robots using an iPad and then navigate them through obstacles to complete the required tasks.

This was just one session in the daylong Full STEAM Ahead Workshop that Cal Poly students organized for the Santa Maria kids. STEAM stands for science, technology, engineering, arts and math (adding the A to the more-often used acronym STEM). A STEAM approach allows students to see how interconnected the arts are with STEM fields. Both can spark imagination and teach creativity, innovation, critical thinking, problem-solving and collaboration.

The arts can also make the introduction of technology more memorable for young kids. For example, by using the story to teach robotics, the students were more motivated to succeed — and more likely to be interested in the technology in the future.

“Look at that!” exclaimed one participant as her team’s robot turned 180 degrees and navigated a part of the course backward. Another group programmed their robot to wear a smiley face and play a Queen song as it ran the course.

The idea is that introducing STEAM fields in a fun, exciting way and making them accessible to young, underserved students will increase the likelihood that those students see themselves working in those fields in the future. Other sessions at the workshop included computer coding run by Cal Poly’s Women Involved in Software and Hardware, building newspaper towers with the National Society of Black Engineers chapter, creating a simple electronic circuit with the Cal Poly Society of Hispanic Professional Engineers, and visiting the Quality of Life Plus Lab, where participants created molds of their own thumbs.

Cal Poly students use storytelling to teach kids how to program robots.” The workshop was a part of a wider community-outreach project aimed at underserved elementary, middle and high school students, their teachers and their families. The goals are to create community enrichment, improve access to advanced STEAM-based education, provide firsthand engagement with new creative technologies and offer career-enhancement opportunities.

The ongoing outreach involves CLA’s Center for Expressive Technology, the Liberal Arts and Engineering Studies program, Interdisciplinary Studies in the Liberal Arts Department, Santa Maria-Bonita School District, and other partners, including the Santa Barbara County Office of Arts and Culture and the California Alliance for Arts Education.

The group plans to build on robotics education with the addition of motion-capture technology. They also hope to collaborate with several companies and entrepreneurs to create performance capture, virtual reality, interactive gaming and 3D animation technologies. The new Jack and Felicia Cashin Expressive Technology Studios — being built on campus right now and funded in part by the Cashins and other generous donors — will provide a new hub for similar collaborations and continued community engagement.