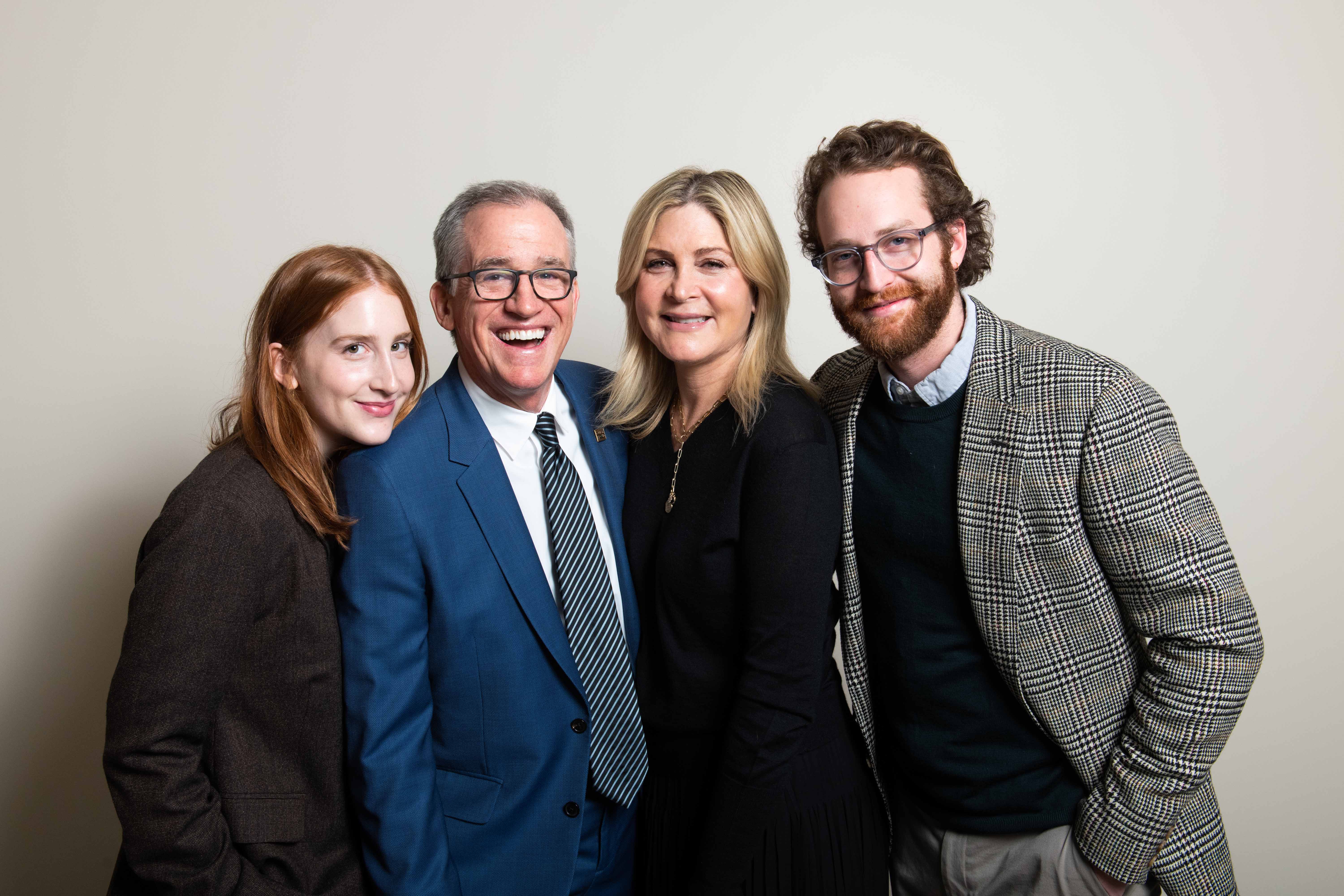 Kevin Falls (Journalism, ’78), pictured second from left with his family, was named the CLA Honored Alumnus for 2019.

The CLA Honored Alumnus for 2019 was Kevin Falls, who majored in journalism at Cal Poly. After graduation in 1978, he interned as a newspaper reporter at the Eugene Register-Guard, but quickly decided to follow his passion for storytelling into writing screenplays. After writing the script for two movies, “The Temp” and “Summer Catch,” Falls was named head writer and co-executive producer on the Aaron Sorkin TV series “Sports Night” in 1999. “The big break was ‘Sports Night’ when it put me in the world of Aaron Sorkin,” Falls said. After Falls ran the writers’ room for “Sports Night,” Sorkin asked him to run the writers’ room for his new show “The West Wing.” Falls was nervous at first. “I was terrified because the people who worked on the ‘The West Wing’ also worked for American presidents,” he said. “I didn’t come from the world of politics, but at the end of the day, it was the kid from Cal Poly who told them when they could go to lunch.” “The West Wing” ran from 2000–07 and was a wildly successful series. The show won Falls four Emmys for Outstanding Drama Series and Outstanding Special Class Program for his role as a co-executive producer. He is currently co-executive producer on the NBC hit series “This is Us,” now in its fifth season. Throughout his illustrious career, Falls has been a creative force behind many series, including “Franklin and Bash,” “Journeyman,” “Pitch” and “The Resident.” “I can’t underestimate how much Cal Poly changed the trajectory of my life,” he said. “Working on Mustang Daily, having advisors like Jim Hayes, who taught me so much about writing and being professional, and applying those lessons to screenwriting made all the difference in the world.” Falls has stayed connected to the Journalism Department and recently participated in a live interview session on storytelling for a campuswide audience. He is eager to share his experiences in entertainment with aspiring writers and has volunteered to participate in the English Department’s speed networking sessions with current Cal Poly students. College of Liberal Arts Dean Philip Williams said, “It’s given our students a once-in-a-lifetime opportunity to learn from Kevin about his own experiences.”

1990s
Michael Daly (Social Sciences, ’92), recently retired Marin County Chief of Probation, was recognized for his 30 years of service. Brad Ledwith (Communication Studies, ’92) wrote a book “Suddenly Single: Helping Widows with Financial Planning After Losing Their Spouse.” He specializes in individual investors and is currently in the top 2% of financial advisors nationwide. Carolyn Nielsen (Journalism, ’94) published her first book, “Reporting on Race in a Digital Era.” Her book analyzes news coverage of contemporary racial inflection points beginning with the election of President Barack Obama and stretching through the birth and growth of the Black Lives Matter movement.

2000s
Abraham Mendoza (History, ’03) is a work-based learning specialist with Eden Area ROP. For nearly five years, he has helped develop career-ready students from career and technical education pathways to fulfill regional workforce needs. Samantha Zupan (Journalism, ’03) was promoted to senior vice president of corporate communications at Glassdoor, leading the development and execution of the company’s corporate communications strategy and overseeing a global team that includes public relations, executive and internal communications, economic research, government affairs and community relations. Molly Choma (Art and Design, ’08) is one of a greatly reduced number of flight attendants still reporting to work as scheduled during the COVID-19 pandemic and was featured in a New York Times article. Danielle Diaz (Communication Studies, ’09) was named one of Dealerscope’s 40 Under 40. The program recognizes a selection of the brightest young talent in the consumer tech industry.

2010s
Caitlin Bercha Risk (English, ’10) recently designed a sales training program that generated $18 million in 12 months. She also hiked Half Dome in Yosemite. Sarah Storelli (English, ’11) is now program director of IBM’s Call for Code. Wyatt Oroke (History, ’13) was named Baltimore’s Teacher of the Year. Armando Torres Garcia (Journalism, ’13) reports for ABC Network News and covers the 2020 presidential election. Carol Wang (Psychology, ’15) is pursuing a doctorate in social and health psychology at the University of Houston and is a Susan G. Komen Research Fellow in Health Disparities at the University of Texas, MD Anderson Cancer Center. She was selected for a Scholar-in-Training Award and presented research at the American Association for Cancer Research Conference in September 2019. Sean Bird (Journalism, ’18) is the founder of Everjourney, a nonprofit organization motivated by the adventure and freedom of cycling that started as his senior project. All product sales are donated to One Bicycle Foundation and used to purchase bicycles for orphans at a Kenyan orphanage. Mike Frank (Journalism, ’18) co-founded Grub for Guardians to connect chefs to medical professionals throughout New York City to provide frontline workers with fresh, hot meals. Irebid Gilbert (Master of Public Policy, ’18) recently created and co-founded Herencia Indigena. The organization trains trilingual individuals to facilitate communication between health care providers and Indigenous communities throughout the Central Coast. In April, Herencia Indigena signed a twoyear contract to provide advocates/ interpreters for all Dignity Health departments. Steve Page (Anthropology and Geography, ’19) made a featurelength documentary film, “The Last Forests Project,” which explains the importance of kelp forests to the marine food chain in Northern California. The film was inspired by a solo kayaking trip.