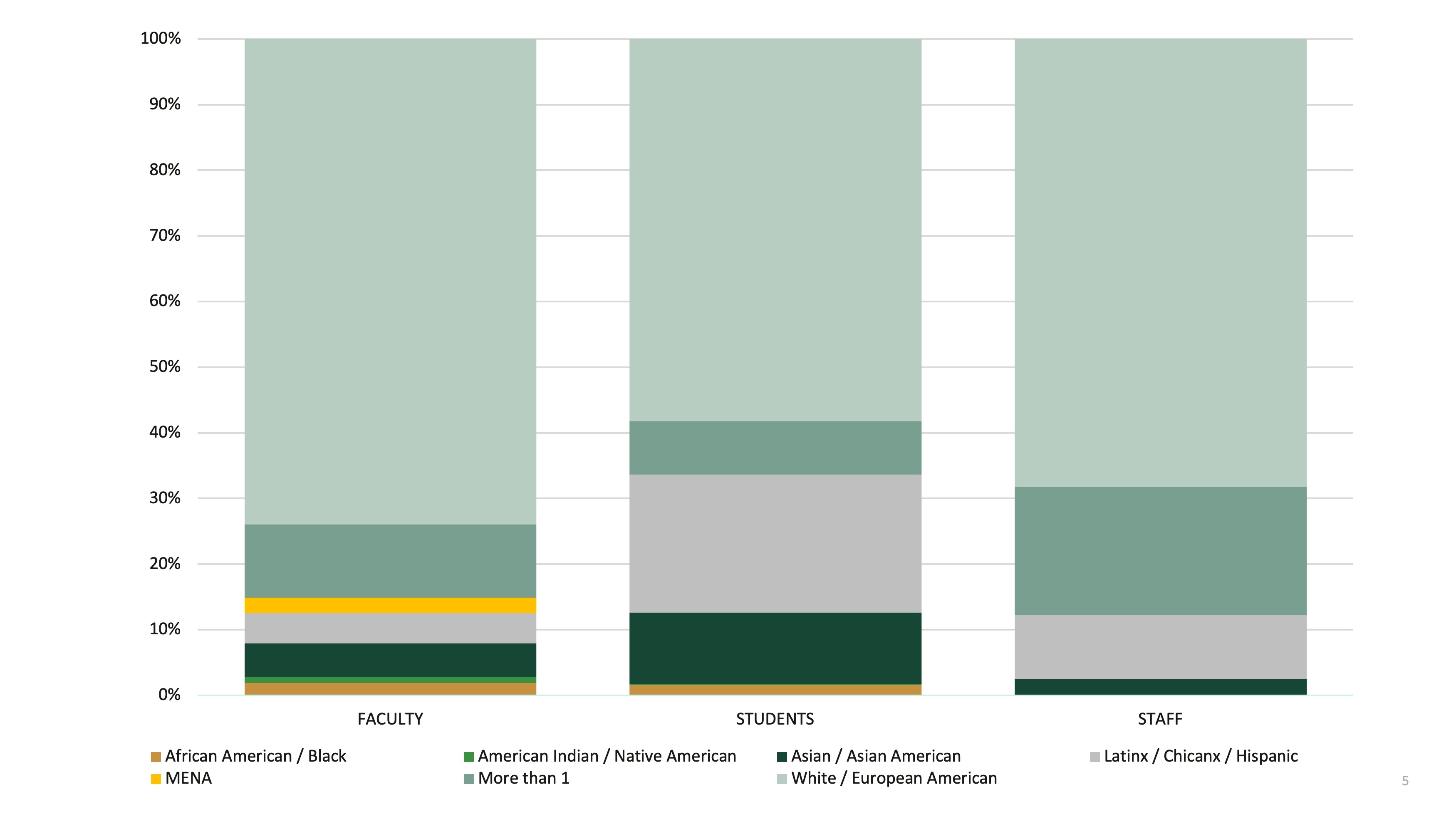 Racial and ethnic demographic identifications
from CLA faculty and staff featured on pg. 5

Though university data is collected for students with regard to race and ethnicity every year, data of this nature for faculty and staff is often incomplete and inaccurate as it is taken at the time of hiring and has taken many different forms over the years. In Spring of 2020, the Dean’s Office initiated a data collection process to determine more accurate current numbers of different racial and ethnic demographic identifications from within faculty and staff. Out of 362 faculty (both tenure-track/tenured and lecturers), a total of 244 faculty (67.4% response rate), and 41 staff out of a total of 60 (69% response rate) completed the survey. 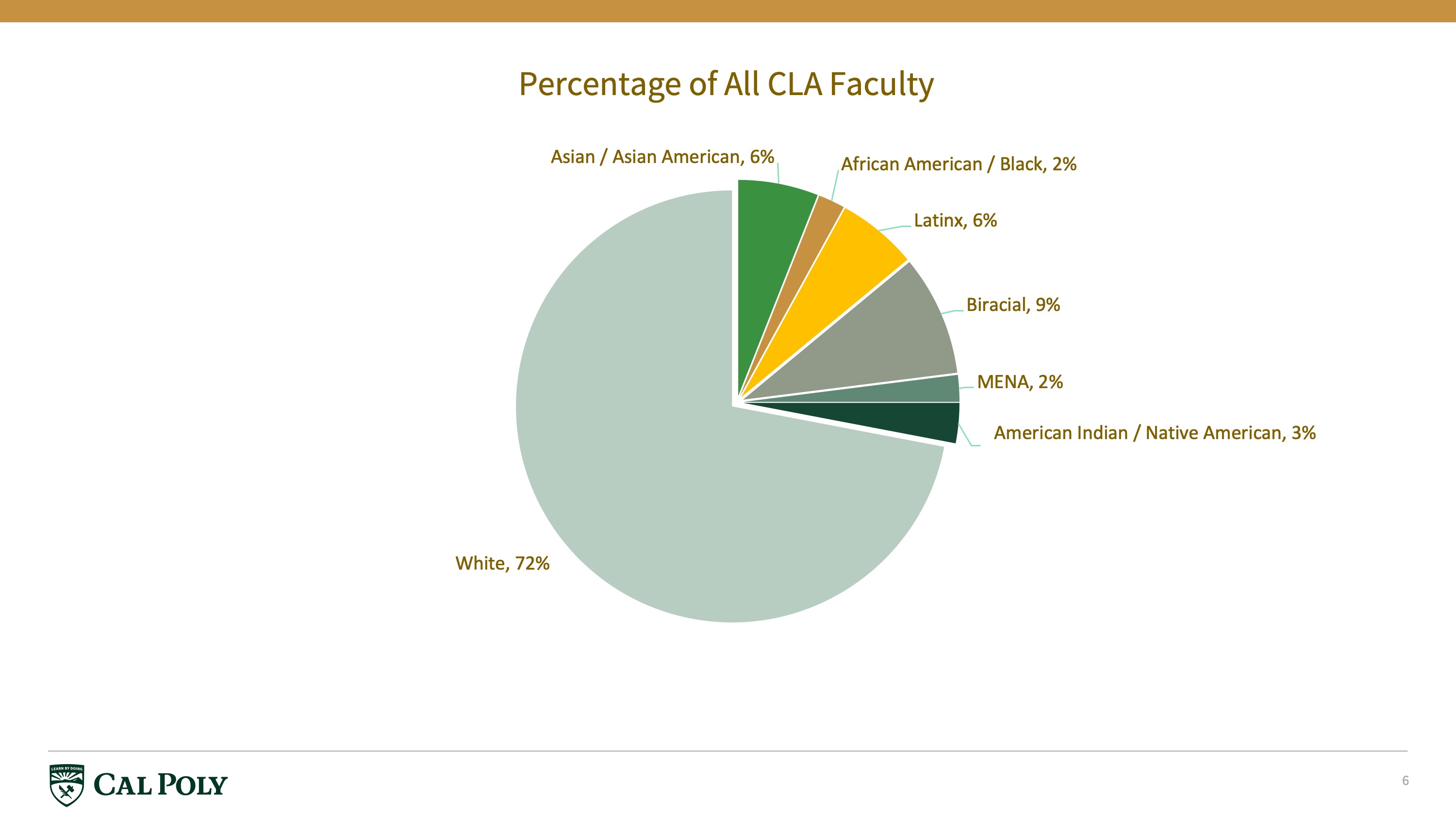 Percentage of all faculty featured on pg. 6

The graphs above show that students are our most racially diverse group in our college sample with approximately 43% identifying as non-White, and 57% as White. Second is staff with 68% identifying as White. Faculty in the college are the least diverse with 72% reporting as White. In addition, 10 % identified as International Faculty and 2% identified as International Staff, with Europe being the most common continent of origin for these faculty. This data provides us with a good baseline from which to work toward developing a more racially diverse workforce and student population that is more representative of the State of California.

Percentage of white and people of color
from CLA faculty featured on pg. 6

In looking at our faculty data, we found it beneficial to look deeper within the different ranks of appointment to better understand progressions that are currently occurring in the CLA. In breaking the faculty into rank, we found that both Assistant (57% White) and Associate (60% White) Professor respondents were quite a bit more racially diverse than respondents in the college who are at the rank of Full Professor (79% White), and more clearly match our current student body. As most tenure-line professors are hired as Assistant Professors when they arrive at Cal Poly, it is important to note that the data show progress has been made in diversifying our faculty in the past few years of hiring. Though some may credit an ever diversifying population across the country at large, an even closer look (see p. 7) shows that the majority of this racial diversity has increased in the last 3-4 years at the same time as our college diversity efforts were intensified. In line with our college-wide 2017 DEI cluster hire, and our participation in the university-wide DEI cluster hire in 2019, recent gains in racial diversity are apparent.

It is important to note that there is room for improvement here, particularly in terms of our population of lecturers. Though this data is more transient, as different lecturers may be on campus in different quarters and years, it seems clear from the data here that our lecturer population more closely aligns with our Full Professor population. This is an area for improvement, because unlike the progression from Assistant to Associate to Full Professor, lecturers may come in at many different stages of life and career, and so this lack of diversity cannot be explained via a generational shift in the more recent calculations of population. Some differences exist in the ways tenure-line and lecturer faculty are hired, and so shifting policies in hiring lecturers to have more similarity in tenure-line hiring will be pursued in coming years. 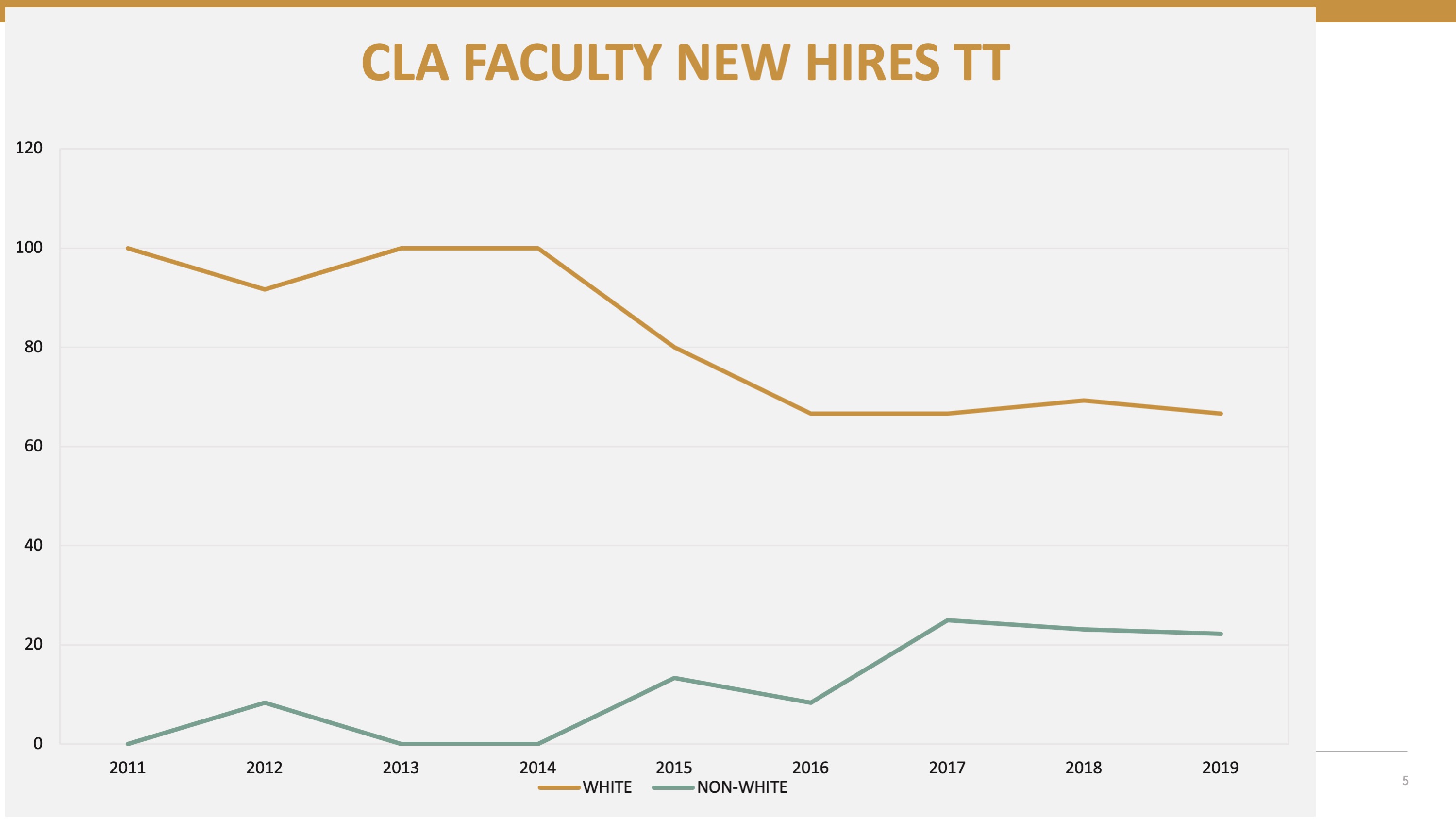 In addition to the graphs showing greater racial diversity in Assistant Professors, overall data for tenure-line hires shows that the increase in diversity correlates strongly with the time frame in which we began to focus our efforts in increasing diversity, equity, and inclusion in the college. The graph to the left shows percentages of tenure-track hires who identified as White and non-White each year since 2011. As is notable, a trend toward equity in hiring between these groups begins in 2015/2016, which corresponds to the development of our diversity committees, and the creation of the position for Associate Dean for Diversity and Curriculum. In 2017-18 we brought our first college-wide DEI cluster hires (a group of hires whose scholarship reflects knowledge and experience with DEI topics) to campus. The trend continues to rise with our more recent participation in the universitywide DEI cluster hire, an idea based on the success of our college DEI clusters. These data show that the sustained efforts in which the College of Liberal Arts has been engaged for the past 4-5 years are leading to solid progress in these areas. The College of Liberal Arts houses many scholarly disciplines that contribute frequently to research in DEI topics, and the expertise of these scholars is critical to the success of the university at large in these efforts as well.