Patience has paid off for Katie Nunnelley.

Due to the formation of a sub-chondral cyst, “basically there was a bubble in my bone, and so it would lock into a 90-degree angle and I couldn’t move out of it,” she recalls. “So, I couldn’t play defense, basically, and my jumping really hurt, so we tried to rehab it. I got a cortisone shot; I tried to do everything I could to be able to play last year, but it was too painful, and so we just decided to cut it short and schedule surgery.”

Nine months after undergoing surgery last May, the senior ranks eighth in the Big West Conference in rebounding, averaging 6.2 per game. 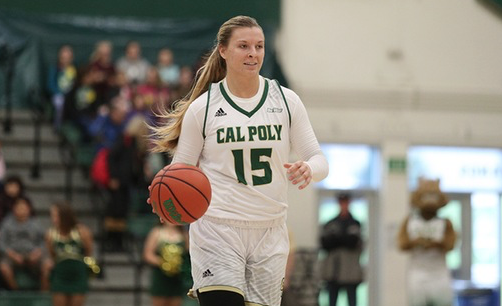 “I was very motivated to come in and do everything I know how to do that I hadn’t really gotten the chance to do before,” Nunnelley said. “So I was really confident in just the sense I was ‘coming back for vengeance,’ basically, and to redeem my (junior) season of not being able to play.”

After playing mostly as a backup her first three years, Nunnelley has started all 20 games in 2018-19.

“It’s different being the starter,” Nunnelley said. “It’s fulfilling to just feel like I finally am in a place where I thought I would be earlier but unfortunately my season was cut short last year. I get to do all the things I knew I could’ve done.”

Her season has included a career-high 21-point output against San Francisco on Nov. 18, along with a career-best 17-rebound effort vs. Sacramento State Nov. 11.

“Before the season began, she was still experiencing so much pain with remnants of her surgery that I thought we were going to be a couple weeks away from her actually being able to participate,” Mustang head coach Faith Mimnaugh said. “I don’t know what triggered the different pathway for her, but she’s been a real warrior for us. ‘Grit’ is probably the one word I would use to describe Katie. She’s gritty to the core, and that’s made a huge impact. She’s probably got more scabs left on the floor than anyone other than Dye. They’re probably competing for who’s shed the most blood on the floor. She’s definitely a gritty kid.”

Mimnaugh identified Nunnelley’s rebounding potential early on after she arrived on campus from Anderson Union High in Shasta County.

“She gave me the idea of watching film on my own teammates and where the ball came off when they miss,” Nunnelley remembered. “And I would get in the gym and shoot with Dye and lots of people, and rebound for them and see where their shot went off. I just got really good at kind of reading whose shot was going where. That was helpful, and on defense just boxing out. I’m a very aggressive player and very physical, and I love doing that part of the game defensively: boxing out and going and getting it. But the offensive rebounding, I definitely studied for that.”

“She’s always had that same instinct,” Mimnaugh said. “She doesn’t mind banging bodies, and that was one component that really stood out for Katie when we were watching her — that she was aggressive and had a real nose for the ball and was a tough kid.”

Fellow senior Devin Stanback, also a starter in the Mustang post, has enjoyed the returned presence of Nunnelley from a passing standpoint as well.

“It’s been so fun because last year she didn’t really get the chance to play,” Stanback said. “We had formed this really good chemistry going in, and then she got injured. So being able to play with her and have this high-low game that we didn’t have last year is so fun.”

“She’s somebody who’s always been reliable as far as bringing the ball up and making good decisions,” Mimnaugh said. “Pretty much from the get-go, she’s always been a great offensive rebounder, but she’s grown into the decision-making component.” During the offseason leading into 2017, Mimnaugh remembers Nunnelley practicing shooting a thousand jump shots per day. “She really took to heart that she was going to be a major scorer for us, and unfortunately the injury knocked her out of that running last year, and it’s impacted her somewhat this year — but the work that she put in has given her the confidence and the technique, the muscle memory to be an effective scorer.”

After not attempting a 3-point shot through her first two seasons, Nunnelley has made 6 of her 16 looks from behind the arc the last two years, and is shooting free throws at a .795 rate in 2018-19 (fifth in the conference).

“She’s got excellent pivot-work so she can go inside, she can knock down 3s; we have full confidence if she takes a 3 that she’s going to knock it down,” Mimnaugh commented. “She’s just such a hungry offensive rebounder that she comes up with hustle play after hustle play. She’s really helped us in the scoring department, but it doesn’t have to be her main thing because she’s being asked to do so many other things on the court.”

Off the hardwood, Nunnelley is a Dean’s List student majoring in Sociology, with a concentration in criminal justice.

“I really put a lot of work into it,” the 2017 Big West All-Academic honoree said of balancing school and sports.

Although she may attend grad school and pursue an MBA, Nunnelley is interested in perhaps ultimately entering the fields of forensic psychology or becoming a juvenile probation officer.

“I’ve always been really interested in the minds of criminals and how that works, and I’m very good at reading people,” she explained, “so I just felt like, especially with those two interests put together, I’d hope to be a good profiler or someone who could analyze crimes, and thought that could be a good fit for me.”

One of her favorite courses at Cal Poly has been SOC 402, Crime and Violence. “I loved that class,” she said. “I was just mesmerized by the material.” Having earned Big West Commissioner’s Highest Honors in 2018, Nunnelley is currently working on her senior project, which will focus on police training.

“I just feel like she’s been a warrior on the court and a warrior in the classroom,” Mimnaugh said. “Having that type of maturity — to be able to take care of all aspects as well as deal with the injury and recovery the way she has — she’s just been so impressive as a woman, and if she gets into law enforcement in some phase, they’re going to get a great one.”

“I think when it comes to leadership, she does a great job with being direct, and with a future possibly leaning toward law enforcement, I think that aligns really well with where she’s going,” Mimnaugh added. “So I’m just really excited with what lies before her in the future because she’s so bright and works so hard.”

This story is originally from GoPoly.com