‘From What I Can See’: Cal Poly Alumna Bridges Cultural Differences with Middle East Photo Series

Separated by an ocean and television screen, it is easy to lump all Middle Eastern countries together, all cultures and people as one violent and chaotic pool of hate. 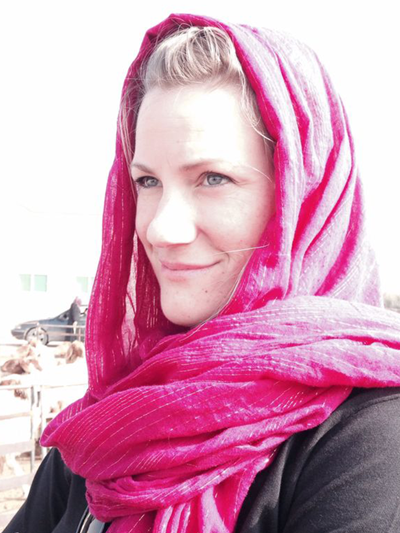 As well as her photojournalism, Heather Finnecy took time
to capture a few self-portraits recording her experiences,
such as this one in Zaatari, Jordan. | Photo: Heather Finnecy

“If you can interact with someone who’s had a different experience than your own, then all of a sudden those people are relatable and accessible to you, to your heart,” she said.

Since 2013, Finnecy (Art & Design, '07) has split her time as a commercial photographer in the Bay Area and as a Middle Eastern photojournalist. Finnecy has traveled throughout Lebanon, Palestine, Israel, Jordan, Kuwait, Bahrain, UAE and Afghanistan — the majority of which the U.S. government deems unsuitable for travel — capturing “normal” life in the Middle East.

“My theory is that we can connect with people anywhere, even cultures we don’t understand,” she said.

Her fascination with the Middle East began in college.

“Our country was becoming very involved in the Middle East,” she related. “I felt like, specifically with women, all Americans really thought about women in the Arab world was that they are all oppressed. And, all the imagery we see is of crying women who are covered and wailing over the death of someone that’s just been shot.

“I knew there was more to it, but I hadn’t seen any of that.”

So she set out to discover more. What began as a five-week trip to Jordan and Israel with a friend turned into a three-month expedition, largely solo.

“I just wanted to meet real people, people that you would meet in any normal situation; just normal, everyday women who were doing things that they wanted to do that I thought people back home could relate to,” she described.

“It just kind of grew from there. I started to add countries onto it. I was there for three months the first time, and then I went back for another four months. I met people through people; I met people through those people. Before I knew it, I had this whole chain of people that I knew over there.”

Used with permission from Heather Finnecy.
If you have difficulty viewing this slideshow,
please view it on flickr.

During her time in the Middle East, Finnecy documented her travels in the photo blog “From What I Can See.” Sectioned by area or specific individuals, Finnecy narrates her interactions with Middle Eastern women. The blog captures women in their element — from farming to studying, from shopping to working out — a striking difference from mainstream media portrayals.

“I don’t want to diminish the severity of some problems that exist in the Middle East. My purpose is not to negate the problems that are there or say that they don’t happen or that they’re not extremely difficult, but to show some of the positives,” emphasized Finnecy.

“I don’t want to diminish that suffering, but at the same time I think that when people feel so sorry for a group, they don’t even see them as actual humans and don’t even know what to do and are overwhelmed.”

Each section of the “From What I Can See” website begins with some context provided by Finnecy — informal and inviting, just as you would share your travels with your friends and family. The combination of the warm narrative style and the straightforward photography is striking and creates an intimate experience where viewers feel as if they are being introduced to each person.

Through this, Finnecy succeeds in developing a bridge between two cultures, reminding us that in the end, we are united as human beings despite any differences.

“No matter what’s going on in the world,” said Finnecy, “Really when you get together with humans from other countries, even if they are countries in conflict, you can ultimately connect on your shared humanity.”

Experience the Middle East through a new lens by visiting “From What I Can See.”