Brenda Dorantes (Modern Languages and Literatures) has experienced the complexity of immigration since she was born. Dorantes, whose parents are immigrants, hoped to use her senior project to immerse readers in the personal aspects of the hotly debated subject. And as a Mexican-American woman, she hoped to discover who she was in America through writing a short story. 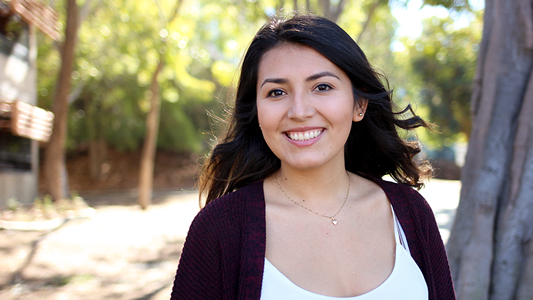 Her project, “Diario de Perla Jimenez,” is an emotional short story about a young, Mexican-American college student, Perla Jimenez, working at a law office in the San Luis Obispo area. The plot follows Perla as she meets immigrants from Latin America seeking to become residents of the United States.

Told in a diary-entry form, Dorantes presents readers with both Spanish and English translations, illustrating the importance and idiosyncrasies of language.

“I wanted the English translation to reflect a clash in language and for it to be apparent that it was a translation from Spanish, so that people could see the weaknesses of language,” Dorantes said. “But it was also for two types of readers — English and Spanish — to understand the same idea. Both versions feed off of each other and make the whole story.”

At the story’s opening, 20-year-old Perla receives a request to be a Visa application interpreter for Maria, who is applying on behalf of her daughter. Up to that point, Perla had only translated legal documents for the office’s cases — removing her from the reality of the people behind the papers. But, as Perla speaks with the clients at the firm, she increasingly becomes unable to separate the issues of immigration with the faces involved.

As Maria begins to tell her story — in Spanish — Perla finds translation difficult, especially as Maria recounts her daughter’s sexual assault. Surprised and unable to fully process her day at the office, Perla begins to write diary entries in an effort to grasp Maria’s account.

The narrative also showcases Perla’s subsequent encounters with her co-workers, who reflect on their experiences as immigrants. While learning about people’s histories, Perla explores her own, discovering that her father began working at 8 years old to support his family and then came to America at age 19.

For Dorantes, the narrative is deeply personal. The story is based on her experiences working in Paso Robles as an interpreter for immigrant families and borrows from her perspective as a child of immigrant parents.

“I had always known that my parents had immigrated here, but I never really understood why they did it,” she said. “I wouldn’t be here today if my parents hadn’t immigrated. I value my parents and others like them that I’ve met through the law office — immigrants working hard to help their families.”

Through her narrative, Dorantes tackles a difficult issue, but gives both Spanish and English readers a gentle nudge to explore the complexity of immigration and to break down stereotypes in an effort to reach better solutions.