The breezy sounds of local San Luis Obispo band Fialta Fialta are drifting across the nation. The self-professed “Central Coast indie pop” group are multi-faceted artists — balancing day jobs with writing, composing and performing music inspired by literature and the world around them. 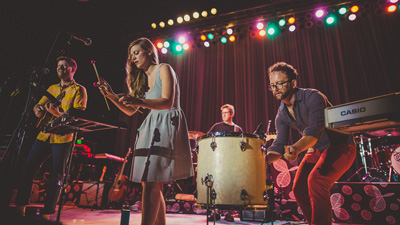 Drawn together from opposite coasts, Michael Leibovich (B.A., Communication Studies 2011), Beth Clements, David Provenzano, and Sarah Shotwell (B.A., History, 2008) met while Leibovich and Provenzano were on tour. In those early days, Fialta’s music was created via long-distance email collaborations.

“We started writing and recording melodies when we were on break from tour,” said Leibovich. “We would send the songs to Beth over email, Sarah would add lyrics … it just took off from there.”

Wanting to find a common place to come together and put down roots, the four chose San Luis Obispo to give the band a chance and for the couples to marry (Leibovich and Clements, and Shotwell and Provenzano).

“This place always had a certain magic for all of us,” said Shotwell. “We were drawn by the weather, the beach, the sense of community here, the college-town atmosphere. It was the only place we could all see ourselves living for a long time; we’re glad this is where we sunk our roots.”

Writers, composers, performers, literary enthusiasts — all on the side of their “normal” day jobs as a high school history teacher, marketer, user-experience researcher, and software technician.

“I think our daytime careers provide us with the flexibility to be truly creative and uncompromising in the music we make,” said Leibovich. “Not having the pressure to ‘earn money’ really affords us the creative license to take more risks and be truer to ourselves and our sound.”

Grounded in the liberal arts, the group strives to be well-rounded, life-long learners, as they hone their many artistic pursuits. “The love of history and studying led me back to the classroom,” said Shotwell, who works at SLO Classical Academy. “I’m a musician, but I’m also a high school teacher. Students, like art and scholarship, have a way of slowly refining — and humbling — us.

“I can’t speak more highly to history’s ability to humble, inform and deepen one’s understanding of the world, something that can only improve art when we make it,” she continued. “For me, the interest in history is far less about war and high-level political developments, and far more about trying to understand humanity and what has connected us all through time. Writing, and certainly songwriting, is a lot about honesty, about trying to nail down what it means — and feels like — to be human.”

Fialta’s first album, “Summer Winter,” released in 2013, nods to literary greats like Poe, Chekhov and Tolstoy. Even the band’s name is a reference to the fictional town in Nabokov’s “Spring in Fialta.”

The deep philosophies behind the lyrics often contrast with Fialta’s California vibe, resulting in a unique sound. “We live in a sun-soaked, happy place,” said Leibovich. “It also helps that we really like twinkly instruments, like ukuleles, glockenspiels, melodicas and surfy keyboards.”

These contrasts that appear throughout Fialta’s music make the group stand out. “Summer Winter” continues to earn national exposure, with songs featured on Kmart and Chipotle commercials, on the season 14 “Degrassi” soundtrack, MTV’s “Awkward,” and NBC shows “A to Z” and “About a Boy.”

Fialta looks to release their next album this year and is experimenting with new sounds and subject matter. “In the next record, we will be dealing with topics that are a little bit more personal,” Shotwell said. “More attempts to wrestle with and understand major themes throughout time: loss, aging, fear, disappointment, community, fate and the general messiness of life. Of course, it will still be a fun pop record, but it seems to be taking us into some new lyrical territory.”

In the end, Shotwell says it is all about “getting to do something creative with my three best friends — one of whom I happen to be married to. Regardless of what’s going on, at 7 p.m. twice a week, the work hats come off, the creative hats go on, and we get to have fun making music together.”