Wong created DENCH. after working at various high-class restaurants and as a pastry chef apprentice in the San Francisco Bay Area. When came to San Luis Obispo, he wanted to bring his passion for cooking with him. He offered seven-course meals for four people once a week — all in his small apartment, just feet away from his bed. 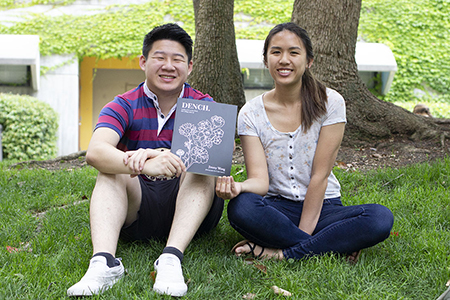 After a successful year of pop-up dinners with guests like University President Armstrong, booked-out months, and national media coverage, Wong wanted to cross off one of his long-time bucket list items: to create a cookbook.

Wong collaborated with graphic communication graduate Carly Lamera to make a cookbook documenting all the meals he served at DENCH. for his senior project. The year-long project, “DENCH.: Recipes and Stories from the College Pop-Up,” features the story of DENCH. and recipes from the pop-up, as well as a look at a day-in-the-life of the aspiring chef.

“I think people were really interested in hearing the story throughout the whole year of me doing the pop-up,” Wong said. “For the people who didn’t have the chance to come eat at the pop-up, this is kind of the second-best thing.”

Lamera used her knowledge from her Book Design (GrC 349) and Magazine Design (GrC 440) Technology courses to create the layout for the book.

“A lot of what I’ve learned in class, I’ve been able to translate it over to the book and the process of making everything look uniform,” Lamera said.

Lamera also tackled food photography by taking all of the photos for the book. Sometimes, this required her to work quickly as many of Wong’s dishes melted quickly, like his Thai Basil Ice Cream. One of the perks of the project was making use of the leftovers.

“I took the photos and then I got to eat the food afterwards,” Lamera said.

The cover art, which is a sketch of a bouquet of flowers, illustrates every flower Wong has used to garnish his dishes at the pop-up. Lamera chose to create a debossed book cover for the readers can feel the sketch with their hands when they hold the book.

Lamera and Wong agreed that one of the most exciting moments of the project was receiving a physical copy of the book for the first time.

“This project let me have a lot of free range,” Lamera said. “After doing this project and taking a book design class, I think it’d be kind of cool to work for a publishing company. It’s made me think more about the publishing side of design. It’s been really fun.”

After spending a year drafting the book and working with a publishing company, Lamera and Wong finally finished the final product. They held a launch party at the San Luis Obispo Botanical Gardens to celebrate.

Now, Wong is working with local businesses to get DENCH. on shelves throughout San Luis Obispo. Recently, the team featured an art installation at SLO Provisions, which debuted at Art After Dark and will be on display for the month of June. At July’s Art After Dark, Wong will have a book signing at Mint + Craft.

As for future endeavors, Lamera will soon start a position at Shutterfly on the digital design team. Wong will stay in San Luis Obispo to market the book for a few more months and then plans to travel and explore different food scenes.

“DENCH.: Recipes and Stories from the College Pop-Up” is available online and in local businesses like Mint + Craft, Boo Boo Records, Kreuzberg California, SLO Provisions, and more for $30.