English major Morgan Condict has won Cal Poly’s 2018 Academy of American Poets Contest for his poem “To an Old Coworker,” which investigates the homelessness crisis in San Francisco through a compelling, personal perspective. He will receive a $100 award from the Academy.

Judging this year’s contest, professional poet Rachel Richardson said, “‘To an Old Coworker’ delicately and vividly describes both complexity of feeling and of the world. I was moved by its compassionate observation and the precision of its details.” 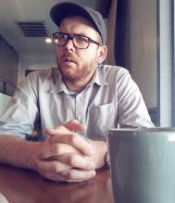 Cal Poly English professor Mira Rosenthal said, “Morgan Condict’s poetry provides social critique, but always with a subtle touch and surprising point of view. His often allegorical poetry gives us powerful metaphors for some of our most pressing questions.”

First honorable mention went to English major Vanya Truong (Pacific Grove, CA) for “Diasporic,” a concise poem that deftly explores the effects of immigration. Richardson described it as “a tiny poem that accomplishes a huge feat. Not a single word is out of place or unnecessary, and the solitary metaphor resonates deeply in the empty space.”

Second honorable mention went to Jacob Lopez (Huntington Beach, CA) for his poem “Notes on Bull Creek Trail South.” Lopez’s poem, the judge said, is “gorgeously vivid in evoking its place through sound, smell, taste, and touch. I'm mesmerized by the sounds of this poem and the rich world it creates.”

Rachel Richardson, this year's judge, is the author of two collections, Copperhead (2011) and Hundred-Year Wave (2016), both in the Carnegie Mellon Poetry Series. She is the co-founder of Left Margin LIT, a literary arts center in Berkeley, California. She also directs poetry programming for the Bay Area Book Festival.

To An Old Coworker

as midnight came and went.
We traced with our bleary vision
the signal from Sutro Tower’s

“just to see what it’s like”
of your coming trip to China,
before going and staying for good.

across from a swanky gym.
How I’d seen it often walking to work,
but how like a nightmare it was

when one day from within
its tenant cursed and howled
as if in the throes of amputation.

And how plainly the flow
of foot traffic, tinted rotten
yellow by the wailing,

festered in confusion before
rechanneling away
from the noise.

in their ears practically
to the knuckle. Only to you
did I, with regret,

place myself
among the flowing
avoidant.