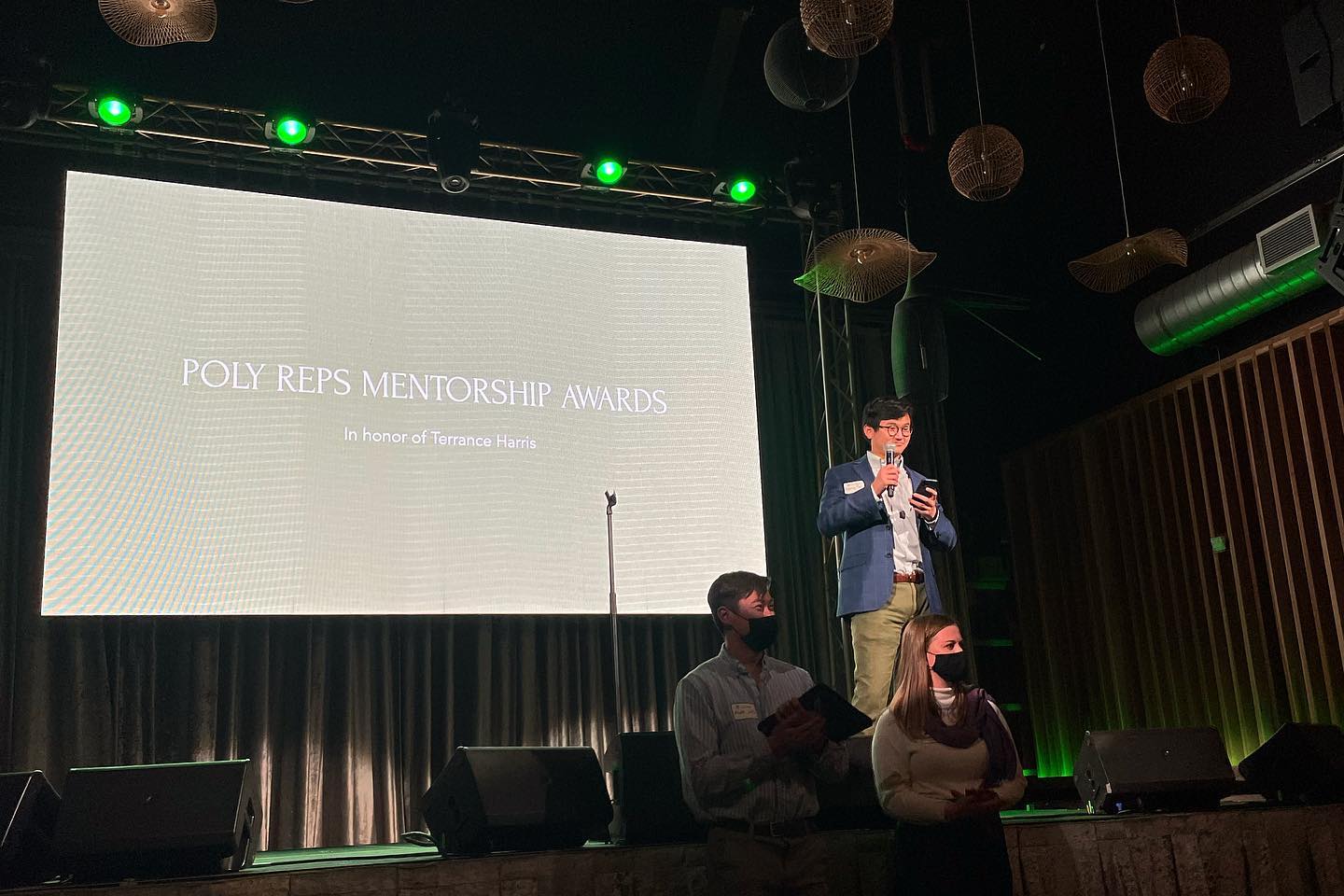 Poly Reps students are involved in the university’s ambassador program, overseeing university committees including Campus Tours, Special Events and School Visits and Presentations. There are roughly 40 students who participate in the organization to assist in promoting Cal Poly to prospective students and their families, alumni, potential donors and friends of the university.

“One award will never do your impact on the world justice, but I hope you too feel seen in all the ways you choose to give yourself time and time again,” Armstrong wrote in a letter nominating Barrett for the award.

When teaching, Barrett prioritizes engaging students through music, discussions and participation “that they didn’t expect,” Barrett said. “I believe that it’s the duty of the elders in our community to act as beacons for the next generation so that they don’t spend all of their time reinventing the wheel but are free to build on what has already been learned by previous generations.”

English Lecturer Leslie St. John, also nominated by Armstrong, received an award for her strength as an educator.

“I embrace the pedagogy of wholeness, which shifts obstacles to opportunities,” St. John said. “I love seeing students cultivate the muscle of introspection.”

Ethnic studies Lecturer Damien Paul Montaño received an award for their work to create a safe space and be a mentor for students who feel marginalized.

“It can make all the difference when [students] see themselves reflected in their guides,” Montaño said. “Mentorship in all its forms can change the student narrative from one surviving to [one] thriving.”

Montaño said they acquired this perspective on mentorship through their own experience growing up as an Indigenous member of the LGBTQ+ community, which showed them how important guidance can be.

Similarly, psychology Professor Julie Garcia, said mentorship became important to her after guiding figures she learned from as a first-generation college student shaped her academic trajectory.

“Nothing is more satisfying than helping students reach their academic goals, and I feel very privileged to be able to mentor students in my role as a faculty member,” Garcia said.

Communication studies Professor Bernard Duffy also shares this sentiment. “It is critically important that faculty encourage students in their individual educational and career goals,” he said.

The annual Terrance Harris Poly Reps Mentorship Awards program began in 2017 to recognize Cal Poly staff, faculty and friends who have made a significant impact on a current Poly Rep.

The Terrance Harris Mentorship Awards are presented in honor of current Cal Poly Vice President of Strategic Enrollment Management Terrance Harris, who is a former advisor of Poly Reps. According to Poly Reps Ambassador Matt Sato and Poly Reps President Grace Lauer, Harris has provided mentorship of what being a Poly Rep truly encompasses, and it is important to the organization to recognize those individuals who go above and beyond for students.