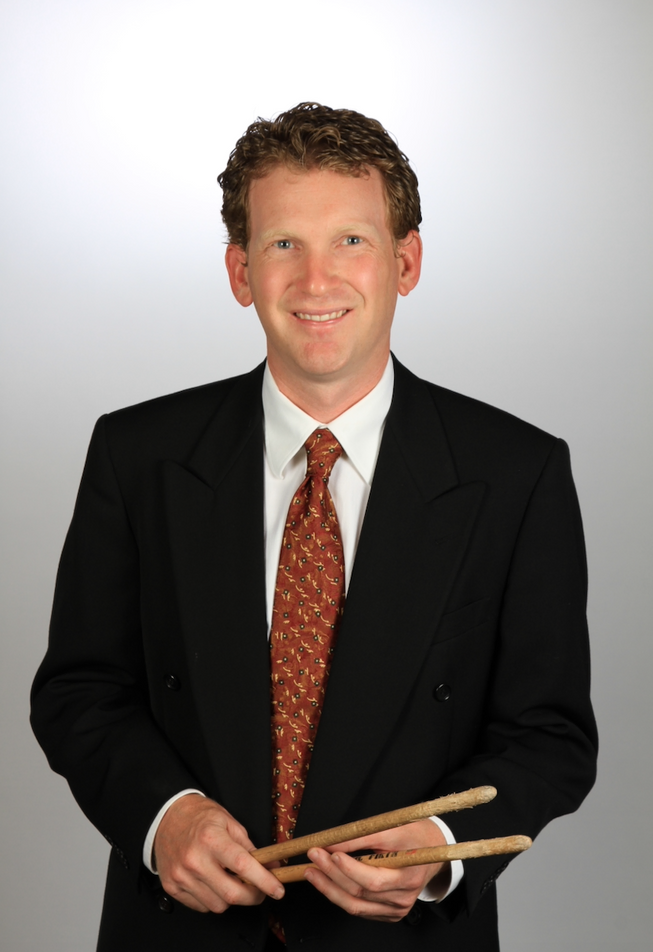 Lecturer John Astaire has taught
at Cal Poly for nearly a decade.

Before he could even speak, John Astaire was pulling pots and pans out of the kitchen cupboards and making music.

Now a professional percussionist, the Cal Poly Music Department lecturer is sharing his lifelong passion for music with others.

“I never thought teaching was something I’d do,” Astaire said. “But when the opportunity came to teach at Cal Poly, I took it and I just love it. I love sharing music with students and people. I love talking about it. I love teaching it. It's just fun.”

Astaire has been teaching percussion and music theory at Cal Poly for nearly a decade; though, his initial passion for music began much earlier.

“When I was a little kid, I just started drumming,” Astaire said. “It was just sort of instinctive, and it was one of those things where I never really considered anything else in my life except for doing music.”

Astaire’s family has deep roots in the entertainment and creative industries with his grandfather being Hollywood icon Fred Astaire and both his parents and siblings dabbling in artistic expression from drumming to oil painting to dance to guitar.

“I guess there are some musical genes in our family,” he said. “But I mean, I'm the only one of my siblings that I think started banging on things before they could talk.”

A Central Coast local, Astaire attended San Luis Obispo High School before moving on to Cuesta College and graduating with his bachelor’s degree from Cal Poly in 1998.

Though music was a major driving factor in his life, Astaire was never sure he wanted to major in it or even attend college. That was until former Cal Poly Band Director and Music Professor Emeritus Bill Johnson recruited Astaire to play for the Cuesta College Wind Ensemble and pursue an education at Cal Poly — something that would change his life forever.

“Bill kind of dragged me into playing at Cal Poly, but there were two teachers there that really shaped my life as a musician,” Astaire said.

The first of Astaire’s role models was Ken Watson, who Johnson used as a selling point to convince Astaire to attend Cal Poly. Watson had just retired from the University of Southern California and was a “big time studio musician in the 70s and 80s.” 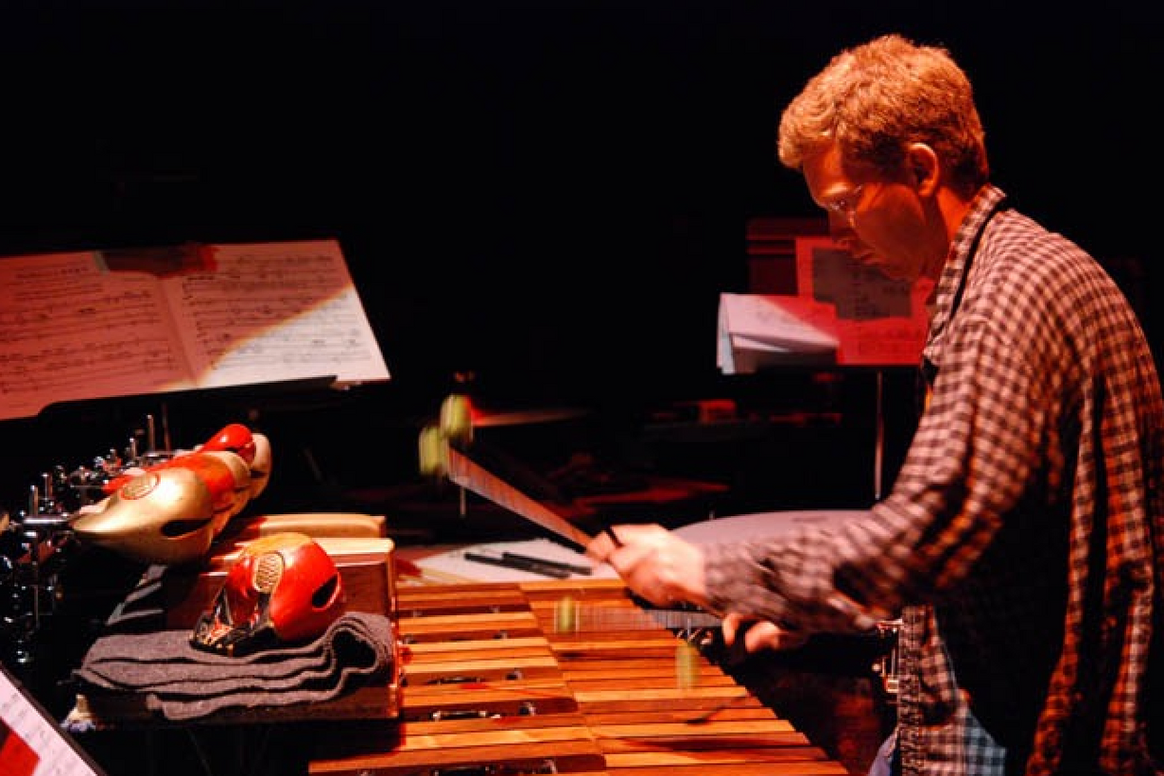 “Ken taught me an incredible amount about the practicality of music making and what it takes to really be a percussionist. Not just a drummer, but a well-rounded percussionist,” he said.

“John taught me how to be a full musician. His composing was very profound and deep, and his teaching taught me to interpret and play Brahms' late piano works which really made for a lifelong learning experience,” Astaire said.

Armed with knowledge from two musicians Astaire credits as heroes, he moved to Indiana after graduation to pursue both a master’s and a doctorate degree in music from Indiana University.

After studying and working in Indiana for nearly a decade, in 2012 Astaire decided it was time to come home, which coincided perfectly with a job opening for a percussion instructor at Cal Poly. 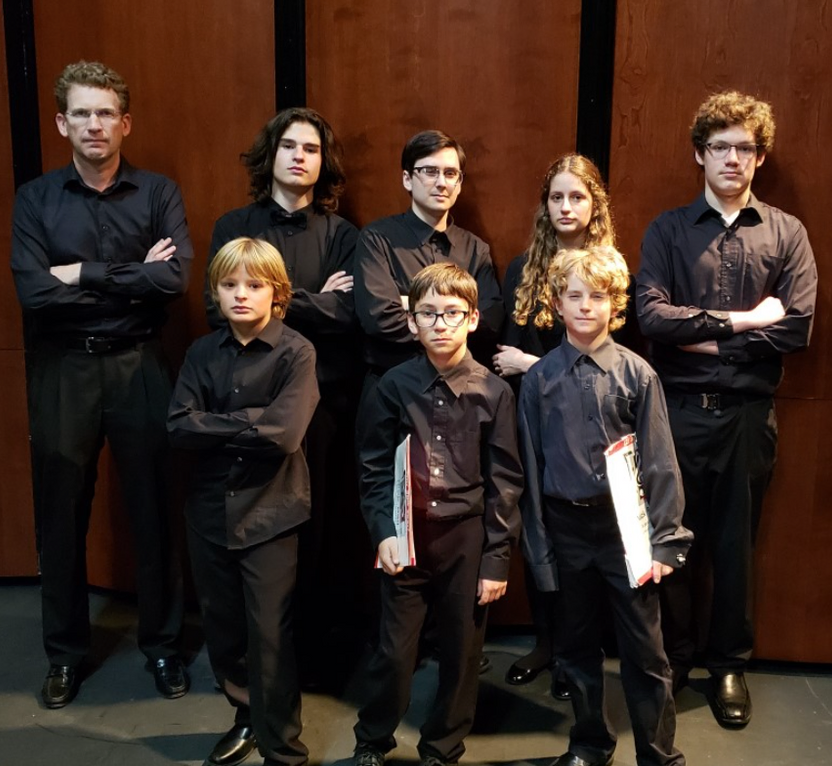 Astaire poses for a "serious" photo with
members of the SLO County Youth Symphony.

Alongside his work in the community, Astaire took over leading the Music Department’s percussion ensemble, Polyrhythmics.

“Taking over the ensemble was part of my teaching duty and when I started it only had four people in it. I was able to grow it to more than 30 people at its height before COVID,” Astaire said.

Though Astaire did not originally set out to teach, his work throughout the Cal Poly Music Department and San Luis Obispo County reflects the impact he has made on the Central Coast music scene.

More recently, his musical impact has grown even further with the release of his first pop record, “Dreams,” which is available across all major music streaming platforms.

“[Dreams] was kind of a big hill to climb for me, because I had written these songs, but I'm not a singer and these are songs that needed to be sung,” Astaire said. 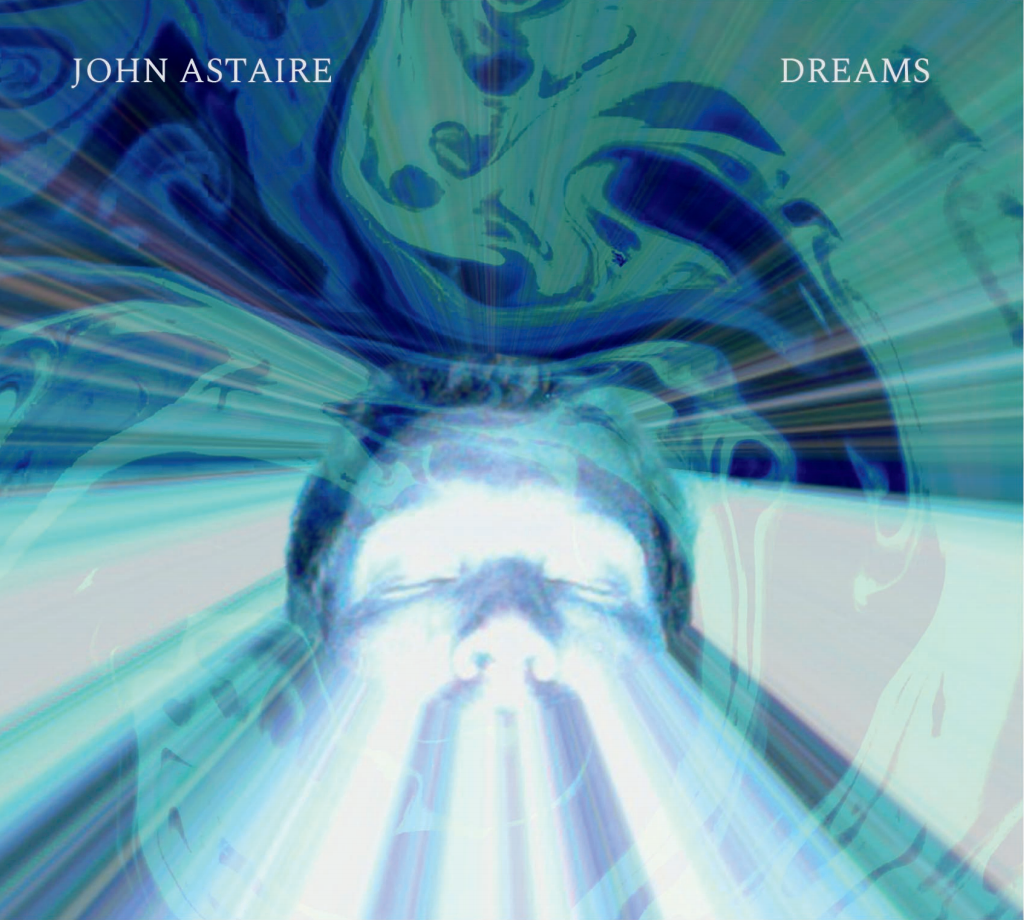 Astaire tapped his friend, and fellow Cal Poly alumnus, Alex Wong to produce the EP and assist with the arrangements. As producer, Wong was able to persuade Astaire to sing on the album — which he was initially unsure about.

“I was so insecure about it. I even told Alex that we may have to hire somebody to come in and sing these tunes and he was like, ‘No way these are your songs. You have to sing them. Just trust me,’” Astaire said. “And I did. I put myself in his hands and I'm very happy with the results. I can't believe how good it came out.”

Astaire has two more records in the works: an instrumental progressive jazz/rock fusion record coming out next year and another pop album collaboration with Wong that will be released the following year.

Until then, Astaire’s next plans are simple: build, create and teach.

“My next goals are to build up a library of actual releases, keep creating music, and I want to continue to teach at Cal Poly — I like what I'm doing,” Astaire said. “For me, it's a privilege to get to teach. I think what every [music] teacher wants, ultimately, is to have their legacy be to produce students in which you have a part in shaping their lives musically.”