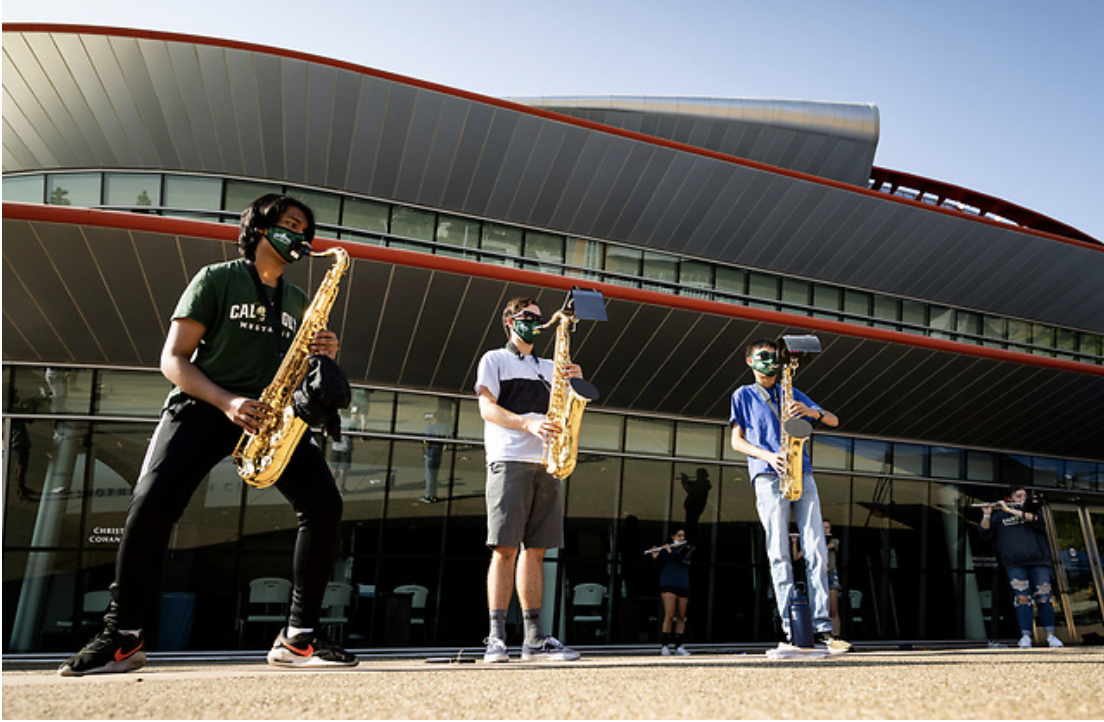 After more than a year without in-person concerts and performances, Cal Poly’s Music Department is back with live events starting in October.

According to Music Department Chair India D’Avignon, while most classes and rehearsals were still in person for much of last year, performances lacked in-person audiences, something the department is eager to bring back.

“There was just music everywhere,” D’Avignon said of the first few weeks of this fall quarter. “Students were practicing for their auditions, and everyone just seemed so excited.”

There will be five main concerts this fall – one for each of Music Department’s ensembles. First, on October 30, nearly 300 students from Cal Poly Bands will perform at the university’s “Bandfest Returns!” concert, including the Mustang Band, the University Jazz Bands and the Wind Bands.

On November 6, the Cal Poly Arab Music Ensemble and guest artists will perform a program of music and dance from the Eastern Mediterranean and larger region. According to Arab Music Ensemble Director Ken Habib, the ensembles will perform “a wide range of Arab art and popular music, as well as seminal selections from historically related cultures.” The concert will feature both a choir and an orchestra. “It’s been a bit surreal, but I quickly felt at home again teaching the ensemble and my other classes in person,” Habib said.

The following week, on November 12, the Cal Poly Fall Jazz Concert will feature the Jazz Ensemble and the Vocal Jazz Ensemble. The two groups will perform music from the album they recorded during the pandemic last year, “another time, another place,” along with music from classic and contemporary writers alike.

Last but not least are the Cal Poly Symphony and Cal Poly Choirs end-of-year concerts. On December 3, guest soloist Tanya Gabrielian will join the Cal Poly Symphony to play classical music with a special underlying theme. According to Cal Poly Symphony Director David Arrivée, all of the songs being performed at the concert were composed by or famously performed by artists who lived with mental illness. Arrivée said this theme was inspired by Gabrielian’s own work and advocacy for mental health awareness.

“I’ve been working with mental health awareness for a decade now,” Gabrielian said. “For me personally, music has never been the purpose of what I do, it’s just the connective tool to bring people together in a community and have a safe space where people can be with each other and experience something together.”

In addition, visual artwork created by people in the local community who live with mental illness will be for sale at the show to raise funds for the local chapter of the National Alliance on Mental Illness.

“I’ve thought a lot about this, and I think the reason why classical music has been so lasting is because it expresses emotions that [many people] feel,” Gabrielian said, adding that music can bridge different experiences and offer a common emotional language to bring people together. According to Arrivée, the Cal Poly Symphony has become a safe place for many students, and for some, playing music can be therapeutica form of therapy. “I’ve had people come because they have a lot of stuff going on in their life,” Arrivée said.

The final performance of the quarter will take place on December 4, where the Cal Poly Choirs will perform for the fifth annual Holiday Kaleidoscope concert. All performers and audience members will be masked at the indoor performances, according to Music Department Chair India D’Avignon, and for those held at the Performing Arts Center, proof of either vaccination or a negative COVID-19 test will be required upon entry.

More information and a full events calendar is available on the Music Department’s website.