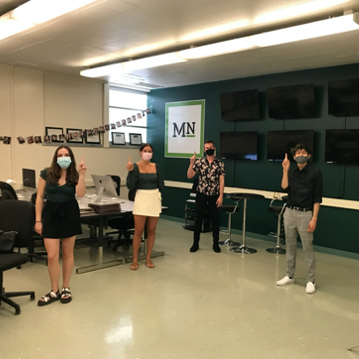 “If you think about it, this contest included news organizations who are based in places where the [social justice] riots were really happening, where the protests were much larger, where the conflict was much greater than what we saw here,” Howe said. “I think that one is probably one that we should be proud of.”

“I think just having that recognition of things that were produced, while we've been doing this work remotely was extremely validating,” Pascua said. “It just goes to show how much people really pushed continue to push themselves during these times.”

According to CCMA Vice President for Conference and Cal Poly Journalism Chair Brady Teufel, MMG was one of more than 60 organizations at the CCMA awards show.

Teufel said that more than 90 participants attended the virtual event for a one-hour show that featured all of the award-winning work, videos from winners and new award categories.

Teufel said that MMG’s ranking so highly among acclaimed journalism schools including University of Southern California and University of California, Berkeley is a testament to Cal Poly’s media organization.

MMG also took first place for Best News Series for their coverage of the controversial hiring of Paulette Granberry Russel.

Teufel said this is “especially commendable when you consider it was published during the summer when students are not working for Mustang News in any official capacity.”

Pascua also said that the summer coverage “shows how committed people on staff are to making sure that we are keeping our audience informed.”

The media organization covers a diverse range of topics over a variety of platforms including print, web, TV and radio.