An Update on Student Media: How Is Mustang Media Group Continuing to Operate Virtually

The Journalism Department has gone virtual, and Mustang Media Group continues to innovate in the ways they bring news to the campus community.

Mustang Media Group (MMG) consists of Mustang News editorial teams across all platforms – print web, radio, and video – and the business team, which sells advertising on MMG outlets. Student journalism moved to this multimedia model a few years ago in order to reflect the increasingly interconnected worlds of broadcast and print media.

MMG is an independent student-run organization with a lot of support from Journalism Department faculty, staff and resources. In addition, the Advanced Newspaper Reporting Practicum and the Advanced Broadcast Journalism Practicum courses occasionally create content for MMG. Students are working on moving all content produced by the different platforms, including stories produced for KCPR and MNTV, on to mustangnews.net. 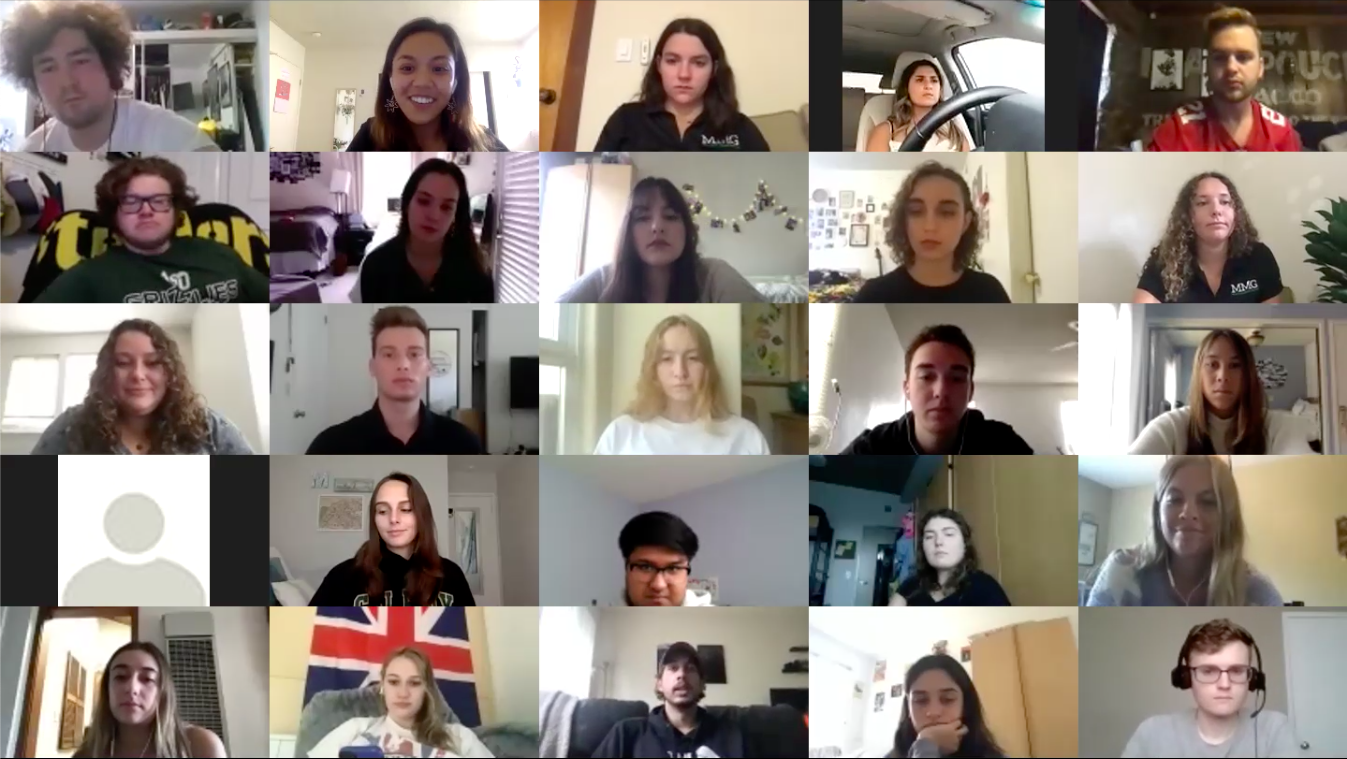 In September, Mustang News distributed their first print newspaper since spring, when COVID-19 caused the print operation to shut down abruptly.

According to Mustang News Editor-in-Chief Sabrina Pascua, the Mustang News staff plans to continue printing a monthly edition for the time being. It will be distributed throughout campus and nearby areas.

She said it is unlikely they will return to publishing weekly editions anytime soon since classes and extracurricular activities are still mostly remote.

“Mustang News is one of the few college media organizations that is even doing a newspaper,” Pascua said. “A lot of other schools and universities are just not printing their papers at all, and I think the fact that we are able to print a monthly one just goes to show the commitment of our staff, both on the editorial and the advertising side, to put out this product for our community and our readers.”

During fall quarter, Mustang News’ video team has mostly been using Zoom recordings of interviews with sources and “vlog-style” self-recordings for video content.

“We are starting to do in-person [interviews] with masks if people feel comfortable,” video team member Daisy Kuenstler said.

Additionally, the video team just got individual green screens which they plan to use to bring back their “MN Now” shows which would be recorded at reporters’ homes.

Traditionally, the “MN Now” shows were recorded in the broadcast studio and would feature one to two-minute video broadcasts in which Mustang News staff cover the week’s top stories.

Kuenstler said that in addition to filming at home, the video team might also film outdoor on campus and around San Luis Obispo.

The video team’s next big project is a live election night show and a live mayoral debate, which can be viewed on the Mustang News website under “Watch” or listened to live on kcpr.org.

Students in the class are currently using advanced technology to connect to the broadcast studio remotely and to continue to produce the shows.

According to journalism senior Ruby Tincup who is taking the course this quarter, the broadcast students have been using Zoom and Zello, an app that emulates push-to-talk walkie-talkies over cell phone networks, to produce the shows virtually.

Students can log onto the broadcast studio computers remotely and access controls and playbacks using a virtual private network (VPN).

This allows students to have experience with all the technical production roles that they would use in a typical newsroom.

“[The Journalism Department] really tried their best to make it as real-deal as it could be, and it’s been going pretty well,” Tincup said. “I’m definitely learning a lot.”

MNTV weekly shows can be viewed on the campus channel, on local channel 19 and on the Mustang News website under Mustang News TV.

Cal Poly Journalism’s Broadcast Engineer Specialist Thomas Morales created most of the virtual tools that Journalism 353 and radio station KCPR are using, according to Tincup.

“I learned how to do playbacks last week, which I had no idea how to do before,” Tincup said. “It was as if I was in the studio.”

When campus first moved to a virtual format back in spring, KCPR staff were able to quickly switch over to remote newscasts using online software including Cleanfeed and Zetta2Go.

This quarter, KCPR is still using these online tools to provide daily live news shows, but a few things have changed.

According to KCPR News Director Lauren Walike, KCPR is bringing back prerecorded wrap stories to the daily newscasts which she is also planning to publish on the website so that listeners can access them anytime, not just during the live shows.

“KCPR is really doing cutting edge things in terms of technology, and it’s been a great experience learning and adapting to the pandemic,” Walike said.

“I’m so fortunate to have such a great team of reporters to work with, everyone has been really flexible and putting in a lot of hard work to make our newscasts sound consistent and enjoyable for listeners,” Walike said.

KCPR news shows air live on weekdays from 9 to 10 a.m. and from 6 to 7 p.m. on Monday, Wednesday and Friday on KCPR 91.3 FM in San Luis Obispo and world-wide at kcpr.org.

The business team, which includes marketing and advertising, is also working hard to sell ads and provide the revenue necessary for Mustang Media Group to function.

Advertising Manager Brynna Barton says the advertising team is selling ads virtually, and they have created a new distribution plan to reach students as well as the local community.

“We have been coming up with innovative ideas for editions and creating sales strategies to navigate the market,” Barton said.

Over the summer, the special edition publication “Go SLO” was published, printed and sent out to all incoming freshman and transfer students.

Other parts of MMG that work behind the scenes to help produce content include the Graphic Design Team, web development teams, MMG’s The Hill Data Team, the Special Sections Team and MMG’s The Hoof Team.