The Show Must Go On: More Than 100 Students Create a Virtual Spring Dance Concert

Two months ago, preparation for the Theatre and Dance Department’s annual Spring Dance Concert was in full swing. Directors and choreographers were selected, dancers were cast and plans to fill an auditorium were underway.

But when the COVID-19 pandemic began to intensify in the U.S., and classes were moved to a virtual format, the directors and advisors had put their minds together to find a new way to move forward with the show — and those efforts are culminating in a virtual concert, called "Vitalis."

The show, which will stream on Vimeo from May 20 through May 22, consists of choreographed dance films created by a cast of more than 100 students, edited together by student directors Alyssa Gatan, Evan Ricaurté and Lindsay Eklund.

“When you’re in the dance studio rehearsing, you can feed off the energy of your dancers. Trying to navigate through this without being in person, it’s challenging and different,” Gatan said. “I’ve tried to figure out how to surpass that and keep working and problem-solving on my own.”

While the student directors expressed disappointment that they would not have a live performance, they adapted: learning skills such as filming and editing in preparation for the virtual show.

By the time shelter-in-place orders had been put into effect, choreographers had already created dance pieces designed for in-person performances. Dance professors Diana Stanton and Christy McNeil Chand encouraged choreographers to stick to the original pieces and adapt them for the virtual format. 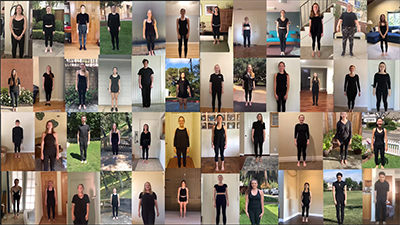 The Vitalis dance cast rehearses indvidually for the video.

Stanton said that one unique aspect of a video format in dance is having control over what the viewer sees. For example, at an in-person performance, the viewer can choose which dancer to focus on, like a friend they may have come to watch. However, in a virtual format, the choreographer can direct the viewer’s eye.

“In this format, you are really looking at these dances from the choreographer’s eyes rather than our own eyes,” Stanton said.

Choreographers had to decide the best way to teach their dancers virtually.

Some created video tutorials, and others held Zoom meetings with dancers. Each week, individual dancers submitted rehearsal videos to the choreographers, who then edited together the videos and submitted drafts for the directors and advisors.

Stanton said she was impressed week after week with how the videos were overlaid to create a collective effect.

Stanton said that while most dancers would prefer gathering in person for a performance, this format provides a unique learning opportunity for the student dancers.

“In the arts, we have what we call restriction studies. You restrict something, and sometimes that makes you explore deeper in places that you can,” Stanton said. “That’s essentially what these dancers have done. They have the most unique camera angles and effects. They are really doing storytelling through movement.”

Gatan agreed. Though she may not be able perform her last show as a senior on a stage, she dances anywhere she can.

“I get to dance in places I never thought I would. I go to the park and dance, I dance in my yard,” she said. “I think it’s so great because dance is something you can do wherever you want, and it’s an emotional and mental break from everything going on.”

And that is the primary purpose of this year’s show: to provide a creative outlet for the students during these difficult circumstances.

Stanton said that throughout the process, she has emphasized process over product. Gatan said this advice has helped her focus on the movement.

“I knew it would be challenging, but we were ready to take it on because we knew we had to preserve something so special, which is being able to dance as a community,” Gatan said.