'We're Doing What The Pros Are Doing.' Student Media Endures in Face of COVID-19

When the COVID-19 pandemic hit in mid-March, Cal Poly’s student media leadership knew they had to find a way to keep operating and serving the community.

The students, with the help of their advisors, got creative: KCPR staff are transmitting remotely to keep their hour-long daily newscast going and the music playing.

Mustang News is navigating the process of putting out news without a print product on campus, as students learn to report stories and work together remotely — an experience that mirrors that of many professional newsrooms.

“This is Learn by Doing in action,” said business administration senior Austin Linthicum, Editor in Chief of Mustang News. “All newsrooms around the country are working remotely at this point. We’re doing what the pros are doing, not just locally but at places like the New York Times.”

Linthicum said that more than half of Mustang News’ staff is no longer in San Luis Obispo, and the staff isn’t conducting any in-person interviews for safety reasons. Student journalists coordinate with their editors via Zoom calls and other remote options.

Despite the challenges, Mustang News has continued to break news and expand their coverage beyond campus into the city of San Luis Obispo.

“One of our goals this year was to step into covering the community of SLO and this was a great experiment to see if we really can play a bigger role in covering the city,” Linthicum said. 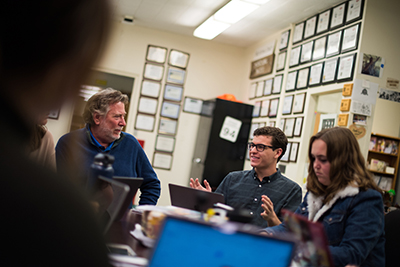 Austin Linthicum, center, speaks at a Mustang News meeting in 2019.

On the lighter side of things, Mustang News adapted their Poly Picks contest, which encourages students to vote on the best restaurants and businesses in SLO, into an online format.

“This hardship has paved the way for some interesting innovation,” Linthicum said. “It’s not easy when you’re remote and have no contact with people, but the editors have really kept their teams together and at the top of their game.”

Patrick Howe, one of Mustang News’ advisors, praised the students for rising to the challenge of covering their community during a crisis.

“They’ve stepped up like champs,” Howe said. “Our highest goal and aspiration is that students use Mustang News as a laboratory to learn the skills that will serve them professionally, and they are. They will emerge from the other side of this as more flexible and adept journalists.” 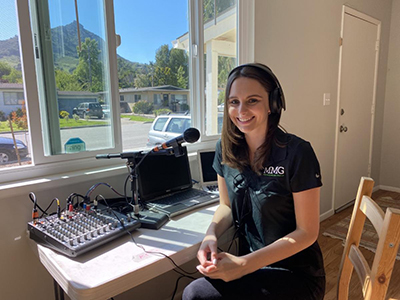 For KCPR’s operations, Morales safely set up a broadcast studio in the home of journalism junior Maya MacGregor, the station’s News Director. It serves as the local, distanced control room for the radio station.

MacGregor oversees a team of 16 reporters, and six of them are on deck for any newscast, according to a schedule she creates. The newscast also provides a platform for students in a broadcast journalism course as well as a senior journalism practicum to get experience being on the air.

The reporters use a product called CleanFeed to transmit their audio stories from their different locations. MacGregor mixes everything for the broadcast, which goes live daily at 9 a.m. Monday through Friday. She then transmits the broadcast via the remote KCPR unit back to the studio in Graphic Arts using a Verizon 4G modem.

“This has been a huge learning experience for me. It’s a whole new setup and it’s completely different from the studio setup,” MacGregor said. “If we didn’t have Thomas, none of this would have worked.”

Morales said the KCPR team was able to go remote through the advent of CleanFeed, as well as creatively using equipment the station already had.

“By redeploying equipment already contained within the department and the station, spiffing up some old laptops and just using what we had, we were able to make it work,” Morales said. “Our investments and gradual improvements year after year in the facilities gave us foundational-level capabilities to be able to expand into areas we never imagined.”

One of the challenges of a remote broadcast format is that KCPR’s team of student DJs isn’t currently able to broadcast, though finding a way for them to do so is a high priority, Morales said. For the time being, the station’s music director and programming director are programming and curating music remotely.

“We’ll keep on trucking,” said business administration senior Max Motley, KCPR’s General Manager. “We’re trying to do whatever we can to keep entertaining and serving the community and adapt to this time.” 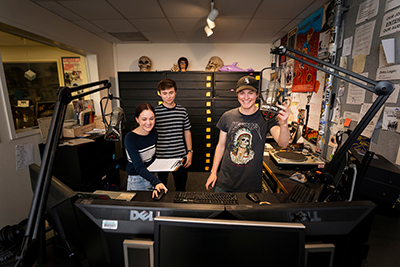 Max Motley, right, laughs with DJs in the KCPR studio.

Motley added that he’s remodeled KCPR’s Spotify and added new playlists, hoping to engage some of KCPR’s listeners there. The playlists he put up a few weeks ago now have hundreds of followers, he said.

“It’s really shown a lot about our media organizations during this time, when a lot of us can’t do our jobs the same way, we have found ways to contribute and to keep our media organizations relevant,” Motley said. “Even though we can’t go into the newsroom, it’s positive to see how devoted our staff is to providing entertainment and news to the community.”

This story originally appeared on the Cal Poly News webpage.