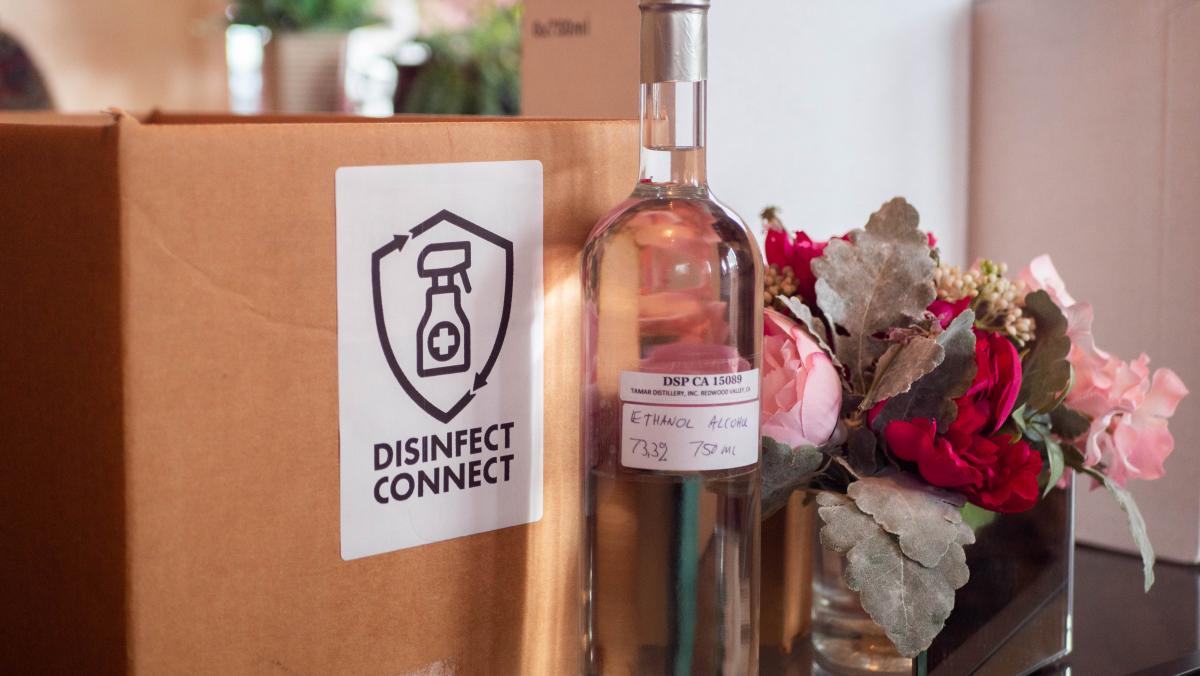 Gabe Pepper got the call the first Sunday of spring break. It was his older brother, Miles.

“My brother had spoken to the manager of our grandma’s nursing home in Northern California, and she was having a really hard time finding hand sanitizer,” Pepper said. “She was going out to the grocery store every morning to try and find some, which was potentially exposing her to the virus.”

Miles Pepper, who has experience with crowdfunding and startups, had called Gabe because he knew distilleries were making hand sanitizer, and wanted to find a way to connect distilleries with nursing homes and other facilities in need.

He asked Gabe if he could get a group of volunteers together to start calling around and making those connections, which grew into the free website Disinfect Connect.

Gabe Pepper and his friend and roommate, agribusiness major Eric Agresti, immediately jumped on it. They soon formed a team with three other Cal Poly students, handling everything from volunteer coordination to outreach and public relations for the website.

“It’s cool and rewarding to use skills I’m learning at Cal Poly as I’m writing the blogs in the blog section and managing social media,” King said. “It makes it feel like my major and my studies are worth my time. It’s really cool to take the Learn by Doing process outside of an academic setting and have to perform by doing it.”

During the long spring break, King and his colleagues volunteered around 12-15 hours each day to get the operation up and running.

“It’s been a really good exercise in business strategy and working in a team, but we don’t have profit as our main goal,” Pepper said. “It’s really cool that our end goal here is helping people and potentially saving lives.”

The team is beginning to build the database along the West Coast, with an ultimate goal of going national.

“We want to build that database out so registered distilleries and nursing homes are aware of what’s going on,” said Colin McAfee, a business administration student who’s volunteering as the project’s content manager. “The shortage of hand sanitizer and disinfectant is not limited to the West Coast, so it’s important that we get a national scale on the project.”

And though the project started with nursing homes and assisted living facilities in mind, the operation has expanded its list of vulnerable populations to include first responders, hospitals and others on the front line of the virus.

Gabe Pepper, a wine and viticulture major, is Disinfect Connect’s volunteer director, managing about 50 volunteers. Agresti is directing the website’s public relations response, while English major Chris King helps with content creation and public relations as the team’s social media manager. Ewing is the outreach director. All of the students are third-years.

Ewing, King, Pepper and Agresti are all roommates who are staying in San Luis Obispo. McAfee is working from his home in the Bay Area, and the rest of the team the students are working with is remote.

"Miles Pepper is leading Disinfect Connect, and some of his friends who work in tech are building the website and doing back-end development," Gabe Pepper said. The Cal Poly students are working on outreach, public relations and making sure the platform is being put to use.

“Due to the urgency and importance of the issue, we’re moving extremely quickly,” Agresti said. “It was just an idea when it first started, and now it’s a fully-functioning website servicing thousands of people. We’ve had to jump in and do things we haven’t really had experience in, and the sink-or-swim pace of everything forced us to adapt on the fly. It’s pretty fun.”

Disinfect Connect has a verification process: organizations in need of hand sanitizer fill out a form, and once that form is processed they show up on the site’s list.

“Distilleries have had no shortage of demand for sanitizer, and it’s been too much in a lot of cases,” Agresti said. “We have metrics that break down the type of facility, how much they need and shows when these places are expected to run out of their supply.

Being part of the team, and being able to not only learn about different aspects of the operation but carry them out, have been the most important Learn by Doing aspects of Disinfect Connect for the group.

“It’s cool and rewarding to use the skills I’m learning at Cal Poly,” King said. “This is a real-word thing with real-world consequences. You can’t afford to mess up an important phone call or have typos in press releases. It’s really cool to take the Learn by Doing process outside of an academic setting and have to perform.”

“We’re able to take this experience and come back into classes able to contextualize what we’ve been doing and put that into the context of coursework,” Pepper said. “Looking back on my college career, this is the coolest and most helpful thing I’ve been a part of and that goes for everyone here.”

The team has set up a GoFundMe in order to keep the project running and allow the team to continue to provide services for free.