From Syria to SLO, Psychology Student Tackles the Issue of Homelessness

As a high school student, Alaina Martine knew she cared about the issue of homelessness. She had volunteered at homeless shelters and taken service trips to do her part. But after one service trip to Greece, she returned feeling transformed and ready to make a lasting impact in homeless individuals’ lives.

"I never liked inequality, but when I was in high school, I kind of had my blinders on and wasn’t paying attention,” Martine said. “I didn’t realize it was such a large issue until traveling, volunteering and getting to college."

Martine, who has travelled to three continents – helping orphans, Syrian refugees, and disabled communities – recalled one profound moment while volunteering on a service trip in Greece in 2015. While donating supplies to Syrian refugees, she met a displaced girl named Sarah.

Sarah was Martine’s age and she was the only one in her family who spoke fluent English. She was dedicated to helping her family communicate with others on their journey, and had learned the language by watching a Disney movie over and over again.

“We were able to compare our lives and see we have so many similarities,” Martine said. "But solely because of where she’s from, she’s going through all these hardships that I am not. It was by complete chance." 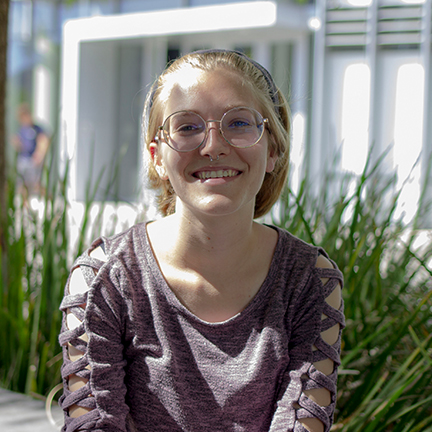 Martine returned to San Luis Obispo, motivated to tackle the issue of homelessness in her own community. She started researching the issue as it pertains to California and produced a video to educate the public about ways they can help.

The video delved into the uncontrollable factors that often lead to homelessness — such as natural disasters, mental health issues, and domestic disputes.

“Being displaced doesn’t make anyone a bad person, but simply a person in a tough situation,” Martine said.

The video has several calls to action — ways that governments, organizations, and individuals can help the homeless. She submitted the video along with an essay to ApartmentGuide, which earned her a competitive scholarship for the quarter.

The Center for Service in Action Program at Cal Poly also keeps Martine connected to volunteer experiences abroad. With help from anonymous donors, she has been able to take service trips to three different countries despite her financial obstacles.

Martine plans to use her psychology major and biology minor to pursue psychiatry in low-income communities. In the meantime, she is looking into volunteering at the SLO Needle Exchange Program, which aims to combat issues like addiction and drug-related infections on the Central Coast.

Martine’s ambition to help solve this global problem has inspired her fellow students and professors, like her Multicultural Psychology professor, Susana López.

“We need more students like her. We need more people like her,” López said. “I know she will continue to do well for herself and for others.”