Cal Poly kicked off the new academic year with commonsense adaptations to the coronavirus pandemic: a hybrid learning plan, postponed athletics competitions, and virtual events, among many other changes. 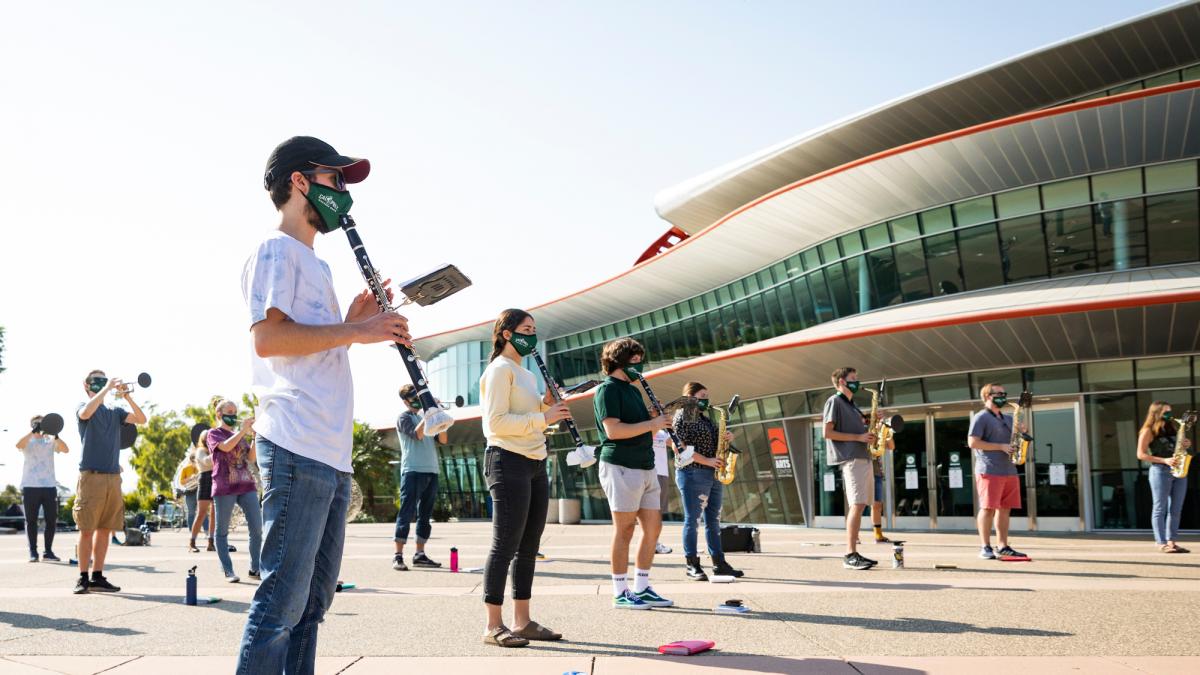 But a quieter campus doesn’t mean school spirit is gone.

Even without the usual fall fanfare, the university’s largest and loudest league of supporters, Mustang Band, plays on — thanks to some creative modifications.

“Our leadership team has put in hundreds of hours of work to develop a plan that allows Mustang Band to meet in-person safely and continue to grow musically,” says Nick Waldron, Mustang Band director.

The band, which has more than 210 members, only learned they would be able to meet in person a few weeks before classes began.

In order to practice together, they split into six sub-groups: four with equal instrumentation of brass and woodwinds, one featuring drumline and one with colorguard performers.

These mini-bands, which practice both musical pieces and marching in formation, rotate between outdoor rehearsal spaces multiple times a week.

In any other year, the musicians bond during band camp in September, an intense week of instruction and rehearsal to prepare for fall sports and campus events. Without the typical fall schedule, band members have doubled down on efforts to welcome new Mustangs into the musical and social fold.

“Our biggest opportunity to foster community within the band happens during band camp, and I think a lot of our success depends on our community itself,” says Madi Glozer, Mustang Band’s chief executive officer and a fourth-year tuba player. “What we’re doing now acts as those first couple days of band camp spread over a few weeks.”

After the first week of rotating rehearsals, the band’s associate executive director Katherine Hanson says the magic was still there.

“It still felt like band, and I wasn’t sure that it was going to with all the changes this year,” said the third-year clarinet player and political science major. “But it still felt like this energy was there.”

The group takes necessary precautions during rehearsals: musicians maintain strict physical distancing; MERV-13 filtration material now adorns bell covers; and members wear special face coverings fitted with a small, closable hole that allows for the mouthpiece of their instrument. The band also has a detailed COVID-19 testing plan that screens members multiple times throughout the quarter via Campus Health and Wellbeing. The core leadership team of staff and students is tested weekly because they have more contact with the rotating mini-bands.

“We just had the first opportunity to play together, and I was living for it because I’ve been anticipating it for so long,” exclaims Glozer. “I think that’s my favorite thing about Mustang Band — I just love playing the music.

“Having an opportunity finally to do it safely and be in a group and play together has been the biggest thing pushing me through all of this.”

While on-campus rehearsals press on, dozens of band members participate virtually via Zoom. During music rehearsals, Hanson says she sets up her laptop near conductor Nick Waldron to ensure everyone practicing remotely can see and hear the instruction. Virtual players mute themselves to avoid any lag in the video feed, but can hear the rest of the band.

On the other side of Hanson’s screen are student musicians like Tomy Stankiewicz, who plays trumpet from his home the Bay Area. Now in his third year with Mustang Band, the architecture student is used to a packed fall schedule with six hours of weekly rehearsal on top of 12-hour Saturdays supporting home football games. At home, he has one hour of structured rehearsal per week with a lot more independent practice. The extra time means he can delve into a wealth of video and written guides the band’s drum majors crafted to keep technique sharp.

“I feel like I’m more eager to play at home,” says Stankiewicz. “I’m not in the middle of 50 other trumpets, so I can hear myself when I practice.”

Though Stankiewicz isn’t physically with the rest of the band, he still makes time to mentor new members of the brass section.

“I’m an upperclassman so I answer questions from the freshmen who are virtual,” he says. “They have questions about warmups or specific things that we do within our alma mater and fight songs.”

After rehearsals, members of the band find ways to connect and have fun. Stankiewicz says he stays motivated because his closest friends are playing with him, even if it’s from afar.

“We have this culture of hosting socials between sections or just band itself,” he says. “Trumpets get together, or we have a whole band movie night, or just a game night led by our music fraternity. I think that just comes with the community with band.”

Still, leaders of the band can’t help but think about what it will be like to have everyone back together and playing at full volume for the campus community. Conductor Nick Waldron says imagining that moment has helped him stay optimistic since March.

“When that moment comes for our first performance, I will be the proudest person at Cal Poly,” Waldron says. “So much of what we do in music is delayed gratification already — countless hours of practice for one moment — so all this feels like one big delay to a great performance.”