Glass to the Future

Andy Paiko (Art and Design, ’02) is bringing modern glassblowing practices to the island of Murano, combining tradition with innovation. 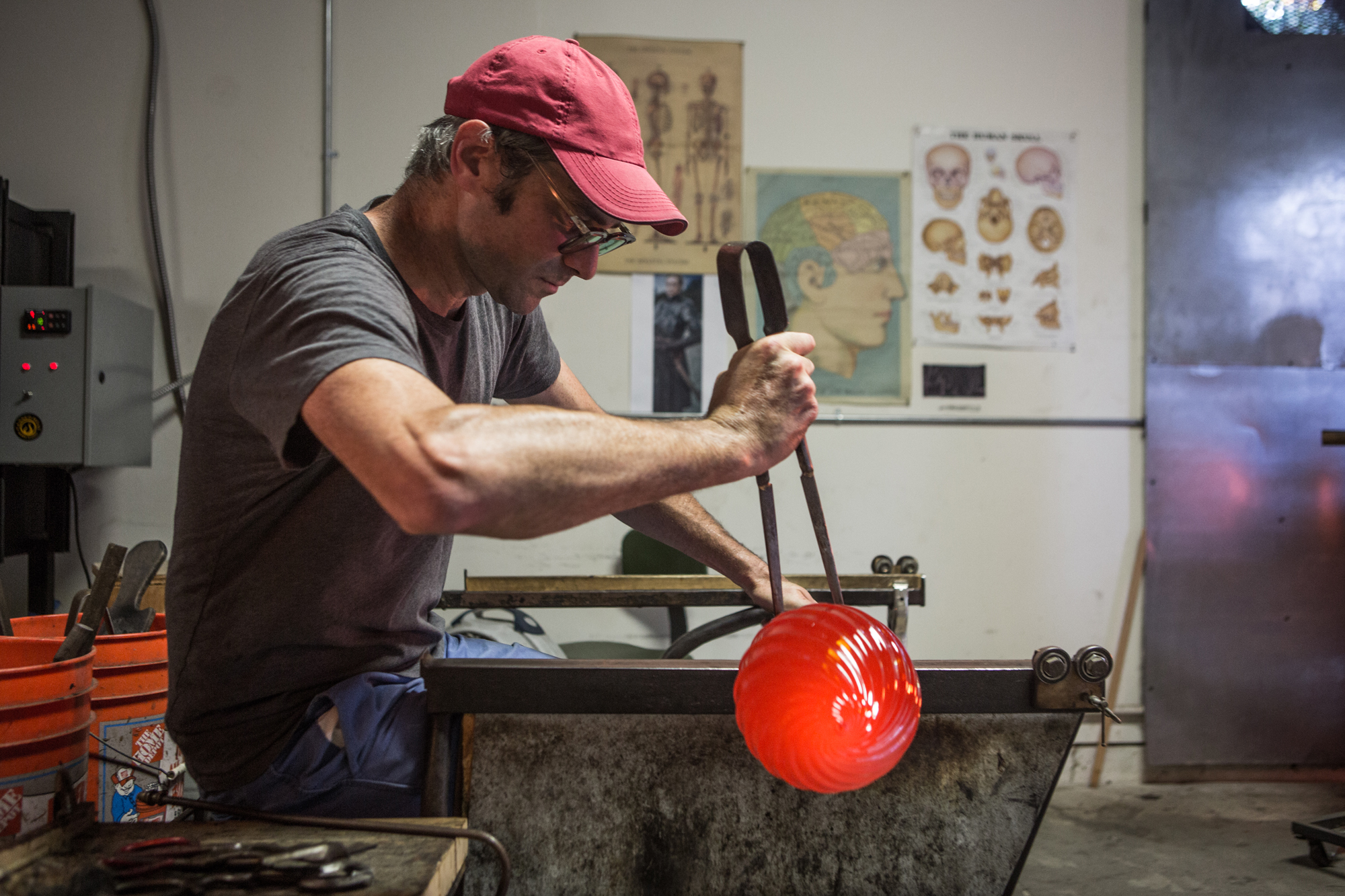 The island of Murano, located in Italy’s Venice Lagoon, is world renowned for its glassblowing tradition dating back to the Middle Ages. However, the industry is facing increasing threats from traditional glassblowing’s high costs and the impact of climate change upon the region. Many of Murano’s glass studios have been forced to shut down as the rising prices of fossil fuels, used to maintain 2,400°F furnace temperatures, have made operational costs prohibitively expensive.

Andy Paiko (Art and Design, ’02), a professional glass- blower normally based in Portland, Oregon, recently moved to Murano to partner with local glass studios and environmental conservation nonprofits for a year. He hopes that sharing his knowledge of more envi- ronmentally sustainable glassblowing methods will help “build a bridge” between Murano’s time-honored craftsmanship and emerging innovative methods. 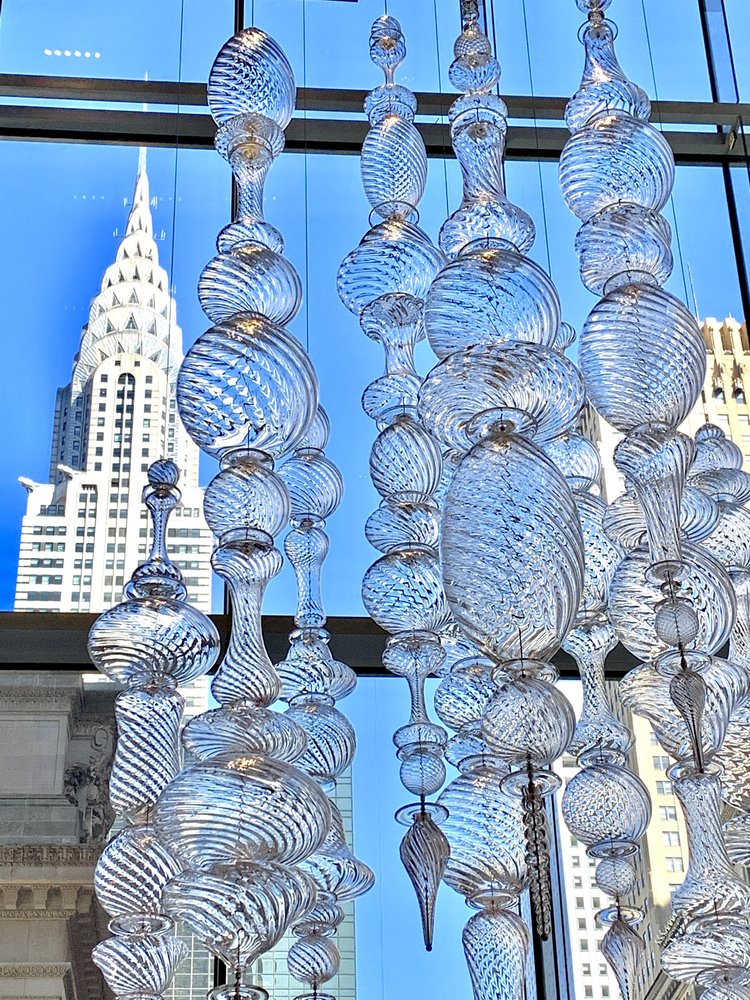 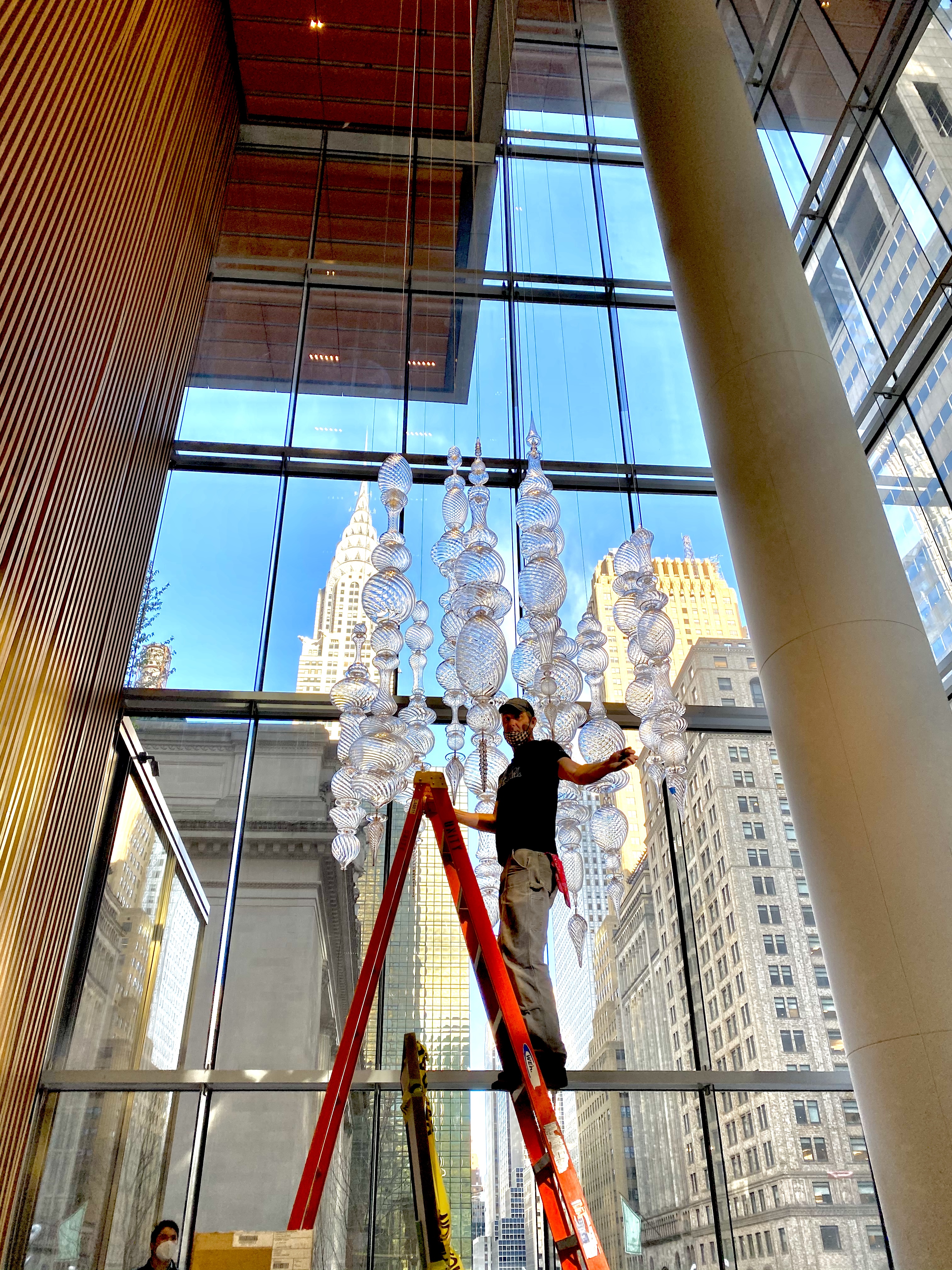 “As a glassmaker, I am very concerned with the sustainable future of the centuries-old glassmaking tradition in the region, and its relatively heavy footprint from an ecological standpoint,” Paiko said. “The Venice Lagoon is a case study in biodiversity, historical mismanagement and dire future prospects, not just for the city’s existential future but also for the tradition of glassmaking.”

When Paiko began studying glassblowing with Cal Poly’s Art and Design Department, the hands-on ethos empowered him to combine his love for artistic expression with the engineering skills needed to build his own furnaces. “A lot of the work that I’ve done in the past with friends has involved mechanical engineering. At Cal Poly, I built several furnaces that we blew glass out of, and that was an experience you don’t get somewhere else.” He credits George Jercich, his faculty mentor in the glass shop and the studio art program, for the ability to build equipment with his hands. “Those skills led to designing electric furnaces with the friends I’ve made here in Portland and overseas, using new technology and more efficient ways of melting glass. What George was doing was essential,” Paiko said. 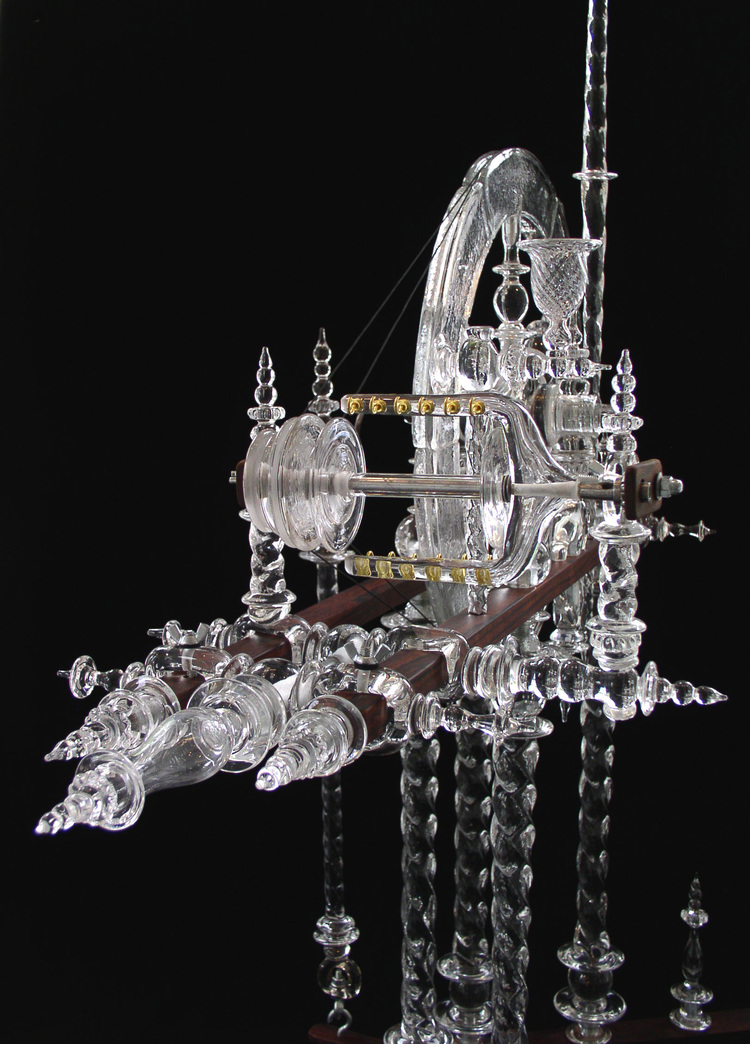 At a time when the College of Liberal Arts had less direct support for interdisciplinary scholarship, Paiko found a way to forge his own future. His success speaks to the importance of CLA’s newer programs for stu- dents whose interests don’t neatly fit into one discipline (see story on the liberal arts and engineering studies program on Page 16). “I remember going to my advisor twice,” Paiko said. “They just threw up their hands and said ‘Well, what do you want to do?’ I said I didn’t know, and things still turned out OK for me, but having more input would have been extremely helpful. My path probably would have been a little straighter.”

Paiko went on to build a successful California-based glass studio with partners including Ken Peterson (Mechanical Engineering, ’02), which he eventually sold to Evan Chambers (English, ’05) before settling in Port- land. His work has been commissioned and distributed internationally, including a glass spinning wheel in the permanent collection at the Smithsonian Museum’s Renwick Gallery of American Craft and pieces in shows at the Stanza Del Vetro in Venice, Italy; the Crystal Bridges Museum in Bentonville, Arkansas; and the Museum of Fine Arts Boston. Paiko’s elaborate chandelier for New York City’s Le Pavillion restaurant has been featured in numerous media outlets, including The New Yorker, and in 2015 he won a Louis Comfort Tiffany Foundation Award in recognition of his work emphasizing how intricate glasswork can serve practical functions.

Over the years, Paiko has partnered several times with the Pilchuck Glass School, a center for artistic innovation and resource development for glassworking, furnace building and large-scale glass exhibitions. In 2017, Paiko won a scholarship through Pilchuck to travel to Venice, where he befriended Marcantonio Brandolini d’Adda, president and creative director at Laguna~B, a Murano-based glassblowing studio committed to reducing its environmental impact through innovation. 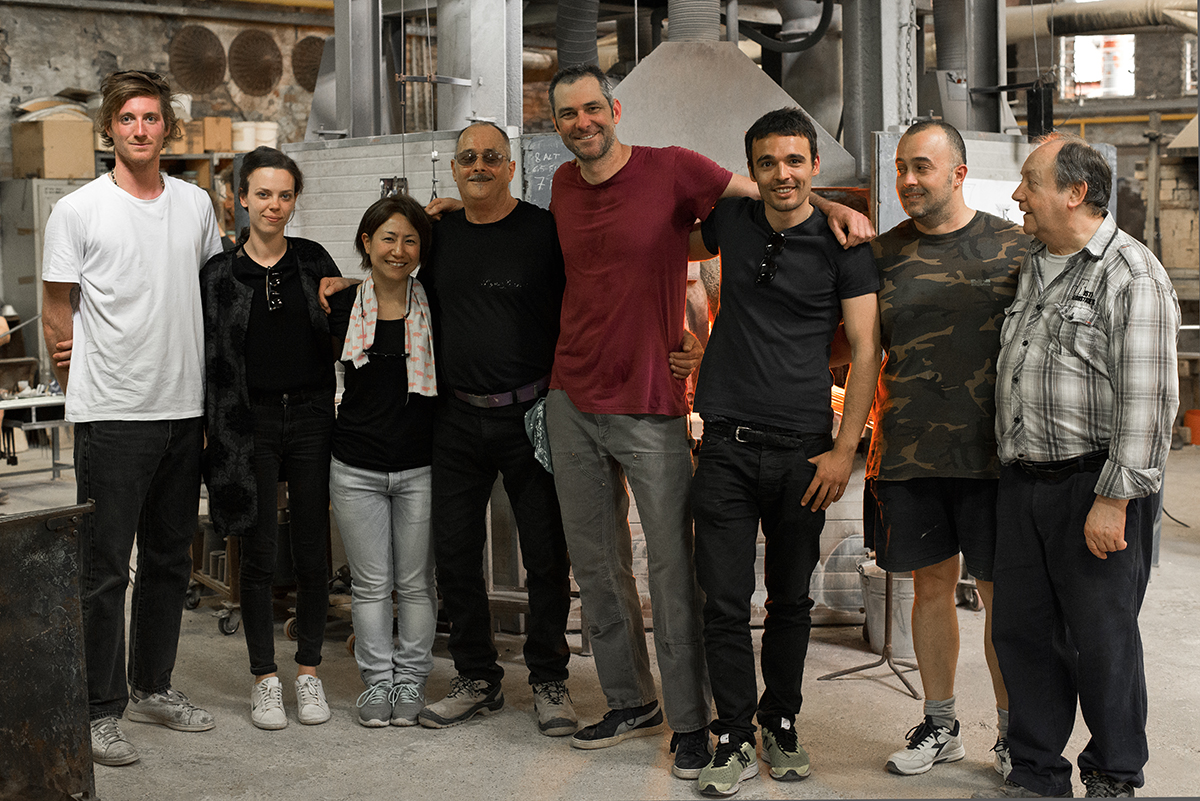 “As a young person born in Venice, he [Brandolini d’Adda] wants to create a bridge between local tradition and Pilchuck’s modern glasswork, and to create a more sustainable future for the islands both artistically and environmentally,” Paiko said. Upon returning to Murano this year, Paiko hopes to be a part of the island’s first electric furnaces at Laguna~B in an effort to mitigate costs and increase efficiency. If all goes well, new practical furnace models may help other glass studios to remain operational.

Together, Brandolini d’Adda and Paiko are associated with We Are Here Venice (WahV), a conservation organization working with local government and industry to implement practical ecological solutions for wetland and water resource management. “I’ve been blowing glass for 25 years and this seems to be a natural progression from naively making vases and driving all over California selling them out of the back of my truck, which is what I did at Cal Poly,” Paiko said. “It may also be possible to connect two distant-but-similar regions — the Venice Lagoon and the California Delta. I grew up in the Delta region and want to see it thrive.
I want to help Venice in any way I can.”

Between his efforts in the glass industry and outreach, Paiko is helping shift the conversation toward forward-thinking practices and policy. By choosing to work in Venice, he hopes to garner more attention and encourage other communities to follow suit. “Since Venice is central on the world stage for its historical and cultural value, the opportunity to play a part there could help set an example for future similar projects globally.”