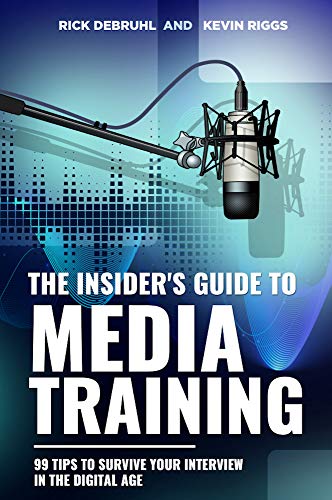 The Insider's Guide to Media Training

DeBruhl and Riggs met each other as undergraduates in the Cal Poly journalism department where they both worked for KCPR, Cal Poly’s radio station.

The two have since made impressive careers in broadcast journalism covering news for companies including ESPN and NBC-affiliate KCRA.

According to DeBruhl, the two worked together in various newsrooms at the start of their careers and remained in touch even after separating to work for different companies. They recently decided to collaborate once more to share with readers what they have learned from their careers in media.

“We thought it would be fun to have a pair of Cal Poly buddies write a book,” DeBruhl wrote in an email.

Their book, which can be found on Amazon, covers topics including how to handle difficult interview questions, understanding how reporters think and creating compelling quotes and soundbites.

DeBruhl had already written and published a similar book on media training, "Communicating at the Right Speed: 52 Ways to Fix Your Professional Communication Troubles," but wanted to work on the new book with Riggs because of his experience in broadcast journalism and at Randle Communications.

“Of all the people I wanted to write a book with, Kevin was at the absolute top,” DeBruhl said.

According to Riggs, while the idea for their book predated the COVID-19 pandemic that began in March, much of the tips and information they wrote about are very relevant to today’s virtual media practices. “During the pandemic, media practices have obviously changed, and the Zoom platform is a great example of that,” Riggs said.

“Part of why I wanted to work on the book was to explain a little bit about how media practices have shifted and to help people to understand that and be a little more effective in doing that.”

The book also distinguishes different media platforms and focuses on how to best prepare for an interview depending on the media platform.

“For most people, getting a media interview may just be a once in a lifetime event or something that will happen very rarely and it can be very intimidating and the goal of the book is quite simply to make it more comfortable,” DeBruhl said.

DeBruhl and Riggs both plan to continue their current work in media training in their respective jobs. In addition to working at Randle Communications, Riggs is also a member of the Alumni Advisory Board at Cal Poly.