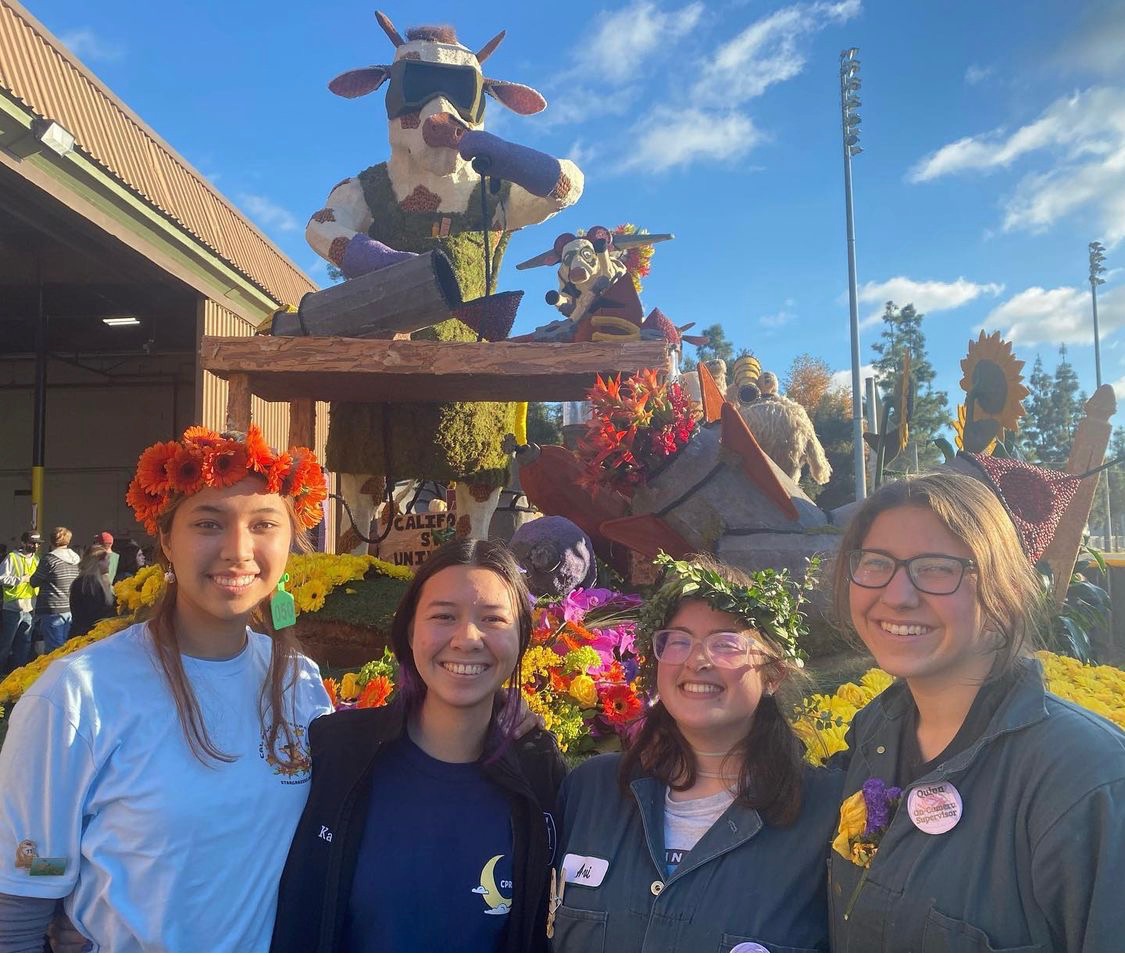 Avi McManus (third from left) poses for a photo
in front of the award-winning float.

While this marks the first time in more than five years that a CLA student has held a leadership position on the San Luis Obispo team, McManus’ accomplishments come as no surprise to Cal Poly San Luis Obispo Rose Float Coordinator Josh D'Acquisto.

“It’s one of those things that, yes it’s rare, but the Cal Poly Rose Float team is open to all majors,” D’Acquisto said. “I would probably venture a guess that it has been five to seven years since we’ve had a CLA major in leadership, but we don’t get locked too into major. I am less concerned about what academic school you belong to as we are here to help you succeed in the role you are in.”

D’Acquisto attributes McManus’ success on the team to their hard work and exceptional writing skills.

“This is Avi’s third year in the program now, this time as the vice president, and they are certainly beginning to tap into their English major skill set through writing press releases and working on the copy for the Tournament of Roses media,” D’Acquisto said.

McManus began their Rose Float experience as a volunteer on the construction team in fall 2019, learning the safety and basics of welding on day one. Shortly after, the 2020 Rose Float President Madison Toney told McManus that they wanted to create a new marketing position, something to which McManus was instantly drawn.

“I thought that seemed perfect for me as the person who knows how to write on the team, so I applied for that position and that's what I ended up doing,” McManus said. “Unsurprisingly, that's not a super popular position on Rose Float because people want to do all the mechanical stuff. So, this year I ended up as vice president and then I still do a bunch of the marketing stuff when I have the time.”

From working on the float to booking hotel rooms to coordinating carpools to writing news releases, McManus spends nearly 20 hours per week volunteering, which grows tremendously depending on the time of year. During the school year from February to October, McManus says they spend about five hours per week with Cal Poly San Luis Obispo Rose Float President Regina Chapuis in meetings and then a few hours each Saturday working on pieces of the float. 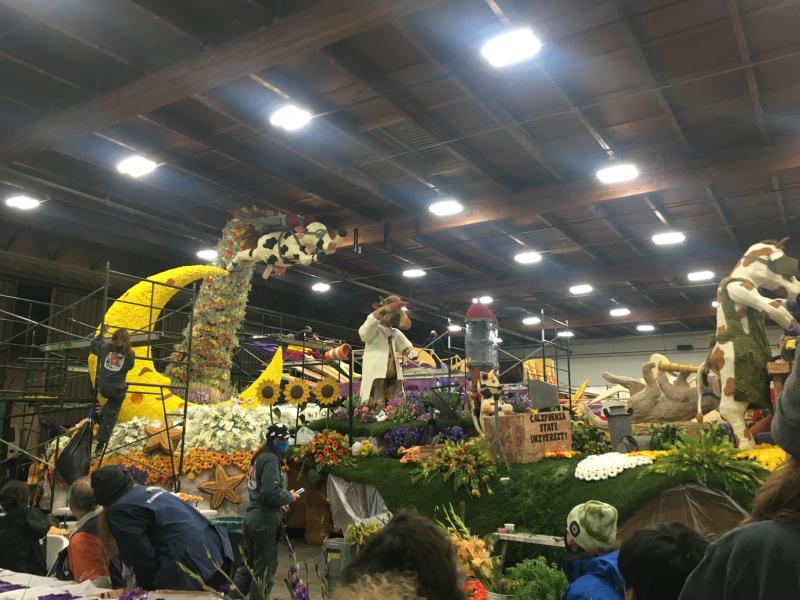 However, the end of fall quarter looks a bit different. “We usually work between 6 a.m. to 10 p.m. every Saturday. But the design and decoration weeks are two weeks in November and December where, frankly, we work 16-hour days for the whole week,” McManus said.

Due to the arduous time commitment, McManus says that the San Luis Obispo team is “historically very close.”

“These are my closest friends and I actually live with a couple of people from Rose Float. The experience is like work and social time all at once,” McManus explained.

Alongside the comradery the San Luis Obispo team forms, one of McManus’s favorite parts of Rose Float is the interdisciplinary learning opportunities and ability to collaborate.

“Something in which I have fun is that I can ask the obvious questions. My friend Annie is sometimes working on a system that isn’t cooperating and I can stand there and say stuff like, ‘Well, have you tried turning it off and on again,’” McManus said. “Now, that doesn't always work. But sometimes the perspective of someone who just doesn't know what's going on can be strangely helpful when others are so deep in the work.”

The challenging labor and time commitment often pay off as the Cal Poly Universities Rose Float, the only student-led float in the Tournament of Roses, usually takes home awards for their extraordinary production. While competing against professional float builders with budgets nearing $1 million, the team has been awarded 61 trophies over the last 72 years commending all parts of the floats from hydraulics to animation to floral effect.

“They don’t receive much for doing this, and they certainly aren’t getting paid,” D’Acquisto said. “They’re in it because of the drive to do this and see it go by on Colorado Boulevard and say, ‘I was a part of that. I built that.’” 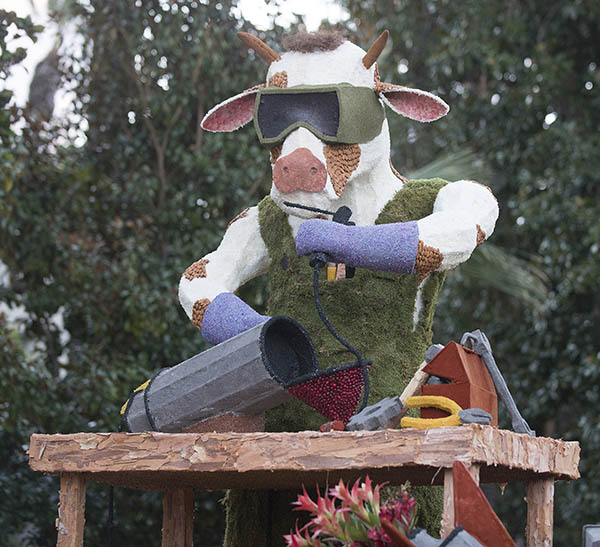 This year’s float, “Stargrazers,” featured a scene from the classic Mother Goose nursery rhyme “Hey Diddle, Diddle” and included an engineering feat of a mechanical cow “jumping” over a moon which McManus called, “an amazing piece of performance art.”

“Something people don’t know about the day of the parade was that the judges arrived about a half hour early and Annie Doody, our animations operator, had to rush to start the animations engine without the prep time she normally would have had,” said McManus. “Clearly it went okay though!”

The team ended up securing the Animation Award which recognizes the most outstanding use of animation across the competition. It is the first time that the team has received the designation since the award names were changed in 1984. 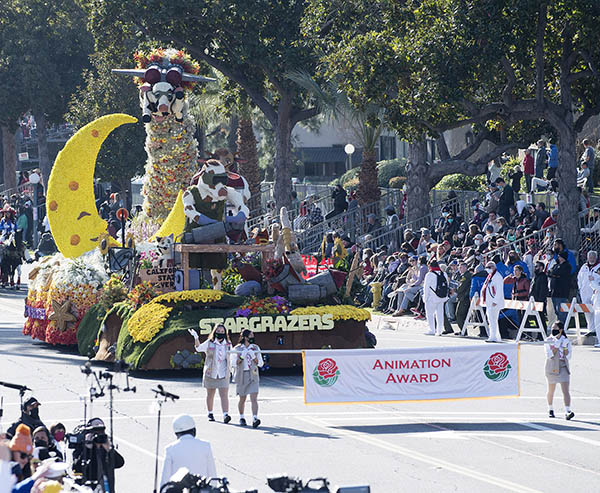 After a year of hard work, dedication and perseverance, McManus was overjoyed to witness the team’s hard work travel down Colorado Boulevard.

“Overall, building Stargrazers was such an amazing experience and I'm so proud of what my team was able to do,” McManus said.