Cal Poly universities Rose Float teams got back to the business of designing a parade float despite the worldwide COVID pandemic that forced the cancellation of the 2021 Rose Parade®. English major Avi McManus is the Communications Manager for the Cal Poly Team and helped organized this year's competition. 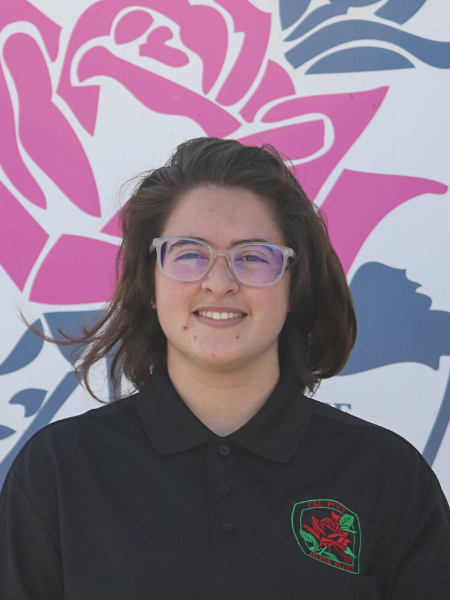 Cal Poly Universities’ Home-Brew Rose Float Competition was a virtual contest that involved planning, design and decoration ideas but no physical construction. The competition brought together teams of students from Cal Poly and California State Polytechnic University in Pomona. These universities have worked together since fall of 1948 navigating the 240 miles between campuses to produce memorable and eye-catching floats. Since then, the two schools’ Rose Float entries have earned 57 awards at the Pasadena classic and become one of the highest profile student events for both universities.

“We really were looking for ways to bring joy back to our Rose Float team and a way to interest potential new members in the team,” said Ralph Agbayani, the design chair for the 2020 Pomona Rose Float team who organized the event with Avi McManus, the communications manager for the Cal Poly team in San Luis Obispo.

“Anyone who had a team in mind, or wanted to work solo was free to do so,” said McManus a senior from Oakland, California, who is studying English. “For those who wanted a team but were not able to find one, Ralph and I matched up these participants with the others who had expressed interest in the same departments either construction, design or decoration.”

About 45 students participated, starting in October, with a dozen teams presenting during the final Dec. 12 showcase. On average, seven out of 10 students on the final teams were first-time Rose Float participants, they said.

“Ralph and I tried to simulate a real float year, so we set a ‘theme’ for the parades,” McManus said. “The theme was ‘Holidays.’ However, much like a regular parade, this was open to interpretation.”

Students from both campuses attended four online workshops to learn about the different aspects of creating a Rose Parade® float and then let loose to create their own designs with a holiday theme.

Entries included dinosaurs, a surfing Santa, a giant beer stein, Pi Day, World Book Day and the Hindu holiday of Holi, which commemorates the start of spring after a long winter, symbolic of triumph of good over evil.

“Strength in Numbers,” which celebrated March 14 Pi Day, received the Sweepstakes Award for best overall team entry. On the float, a colony of ants and other insects have taken over a picnic. A queen ant draped in a picnic blanket cape and monarch butterflies stand poised at the front of the float, while a classic raspberry pie rises above the float at the back.

The “Strength in Numbers” team was made up of Cal Poly’s D’Angelo Reyes, a senior from San Francisco majoring in computer engineering; Paige Brunson of UCLA; Jessica Goldberg of Purdue University; and Cal Poly Pomona’s Mike Sturman.

“I enjoy themed entertainment, so being able to design a parade float fits nicely into my career goal of designing theme parks,” said Sturman, a sophomore majoring in construction engineering and management.

Now a design lead for the Pomona Rose Float team, Sturman started as a volunteer last year, welding and shaping elements for “Aquatic Aspirations,” which received the Director Award for the most outstanding artistic design and use of floral and non-floral materials at the 2020 Rose Parade®. He also worked on a mechanism to make fish swim in and out of a sunken ship.

“Multicolor Mayhem,” based on the Hindu holiday of Holi, with monkeys playing Tabla drums and other happy animals under a rainbow of colors, was another Cal Poly SLO team winner. The entry — by Saira Mapes, a second-year liberal studies major from San Jose, California, and computer engineering senior William Terlinden of Long Beach, California — captured the Crown City Innovator Award for the most outstanding use of imagination.

“The designs exceeded my expectations,” Agbayani added. “I loved the whimsy of ‘Cretaceous Catastrophe’ and the attention to detail in ‘Strength in Numbers,’ which nailed down details in design, construction and decoration.”

McManus, who plans to graduate in June and pursue a career as an elementary school teacher, said the goal for the contest was not just to keep participants excited in a year when there was neither a float nor a parade.

“The main purpose was to allow anyone who was interested to learn more about Rose Float in this weird year,” they said. “The Zoom meetings allowed new people to learn about the program at the same time that it gave current team members a refresher. The group aspect of the contest gave current team and new members a chance to meet and work together.

“I think that any connections that this competition managed to foster during the year of social distancing was a triumph. I also hope that when the new team reforms in person, some new people will already be acquainted with our methods and possibly know some of the current team because of the competition.”

While the Tournament of Roses won’t be hosting the traditional Rose Parade® in 2021 due to COVID-19, it will produce a New Year’s Day celebration to be broadcast in its place — featuring students from both Cal Poly universities.

Cal Poly Rose Float teams will be highlighted in one segment.